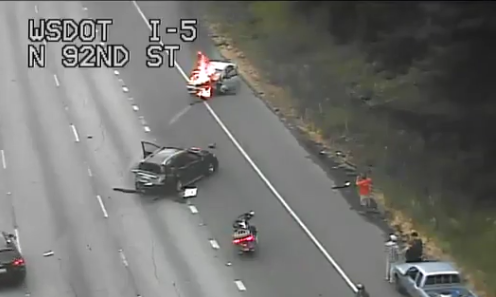 An incident involving six vehicles caused only minor injuries but resulted in major delays for commuters last Friday morning. The pile-up became when one driver struck another vehicle that they were following too closely; they then spun into a high-occupancy lane, striking three more vehicles in the lane and slamming another with the ladder that was on top of his truck. Four people were transported to the hospital with minor injuries.

A 6-year-old girl was injured on Sunday afternoon when she fell out of a car as it was making a turn out of a parking lot. The car she fell from then hit her. Police arrived at the scene and interviewed the driver, who is cooperating with the investigation. The little girl is now in stable condition; police have not yet decided whether to file charges, since the girl was not wearing a seat belt when she fell out of the passenger side door.

A crash near Greenwood on Southbound I-5 on Monday left a car on fire and traffic backing up during the morning commute. Emergency responders put out the fire and removed at least two cars from the roadway.

A car accident in Seattle’s Ravenna neighborhood on Tuesday night left nine people with injuries. Two vehicles were involved, one of which flipped over and landed on its roof. Emergency responders took four people to a local hospital and treated five more with minor injuries at the scene. All four of the people who were hospitalized are in stable condition.

A woman succumbed to her injuries this Tuesday following a bicycle crash in early May. According to witnesses, her bicycle’s tire got stuck in the streetcar tracks that run through Seattle’s First Hill neighborhood, causing her to flip over her handlebars. She was wearing a helmet at the time of the crash, but still sustained critical injuries. Police are investigating the circumstances of the accident, and the Seattle Department of Transportation is looking into bicycle safety issues in the area around the streetcar tracks.

Two teenage girls were struck by an SUV after they got off their school bus in Bremerton on Tuesday. Randy Allen Payne was booked into Kitsap County jail on charges of felony vehicular assault, DUI, and hit-and-run. Payne told police that he did notice that he hit something but he was looking for his son so he did not stop driving.

Two women died after their SUV rolled down an embankment and plunged into the Pend Oreille River on Wednesday. The child, who has minor injuries, is recovering at a local hospital. The man who saved her life is being called a hero by the local community; a retired lieutenant colonel and a former mayor of Cusick, he ran out to the crash site after hearing the three-year-old girl screaming for help.

A bicyclist riding on U.S. Highway 12 was struck by the side-view mirror of a pickup truck that was trying to pass him on Wednesday. The cyclist, a resident of Georgia, was taken to a local hospital for treatment. Police are investigating the circumstances of the collision.