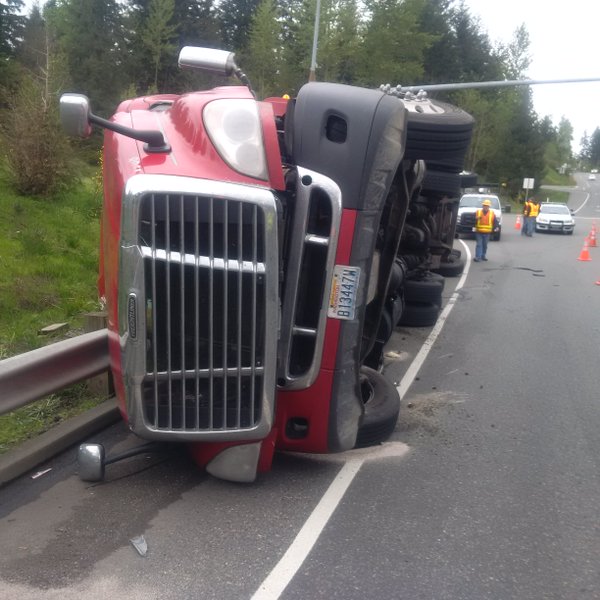 Girl airlifted to hospital after crash

An 8-year-old girl had to be airlifted to a regional hospital after a two vehicle crash in Olympia, Washington on Saturday. Four other people were taken to local hospitals following the car accident. Police arrested a man on Sunday in connection to the crash; they believe he may have been driving under the influence.

A semi truck crashed in Skagit County on Sunday, spilling 45,000 pounds of bananas onto the northbound lanes of I-5. No injuries were reported. The road was blocked for two hours while the was cleaned up.

Two drivers are currently in Pierce County Jail and after a 5-car crash on Monday left one man dead. The crash began when one driver struck a car that had been abandoned on the shoulder of I-5. Troopers believe that the two drivers who are currently in jail were drunk at the time of the crash.

A Puyallup man died after crashing into a stopped dump truck on Monday night. The dump truck was stopped and its two occupants were not injured. Police believe the crash was caused by inattentive, possibly drowsy, driving.

Three people were thrown from a car during a crash on I-5 on Monday evening. A young woman driving a Ford Escort crossed four lanes and rolled over in the middle of the highway. Neither she nor her two passengers were wearing seatbelts. One of the passengers who was ejected from the vehicle was in critical condition, while the other two injured people were in satisfactory condition. Police believe drugs or alcohol were involved in the crash.

A one-car crash on Sand Point Way in Seattle left the driver injured after the car rolled over and hit a tree. Two passengers were in the car, but were uninjured. Police have not said whether they believe drugs or alcohol to be a factor in the crash, which happened just after midnight on Tuesday morning.

On Tuesday morning, the owners of an RV parked in Mount Baker returned to find that the vehicle had rolled over an embankment and was teetering precariously on the hillside. The owners’ dog, a pit bull named KK, was trapped inside. Seattle firefighters stepped in to rescue the dog, and a towing company was able to haul the RV off the hillside.

A car slammed through the wall of a Kent apartment complex on Wednesday afternoon, causing extensive property damage. The crash began when a station wagon hit an SUV from behind, then continued eastwards for a block before crashing through a fence, clipping the building, and finally stopping after crashing into a tree. Police are still investigating the driver, who was sent to the hospital with non-life threatening injuries. No residents of the apartment building were injured.

A trailer carrying human waste overturned on an I-5 off ramp in Everett on Wednesday, covering the road with sewage and diesel. Police closed the road for most of the day to get everything cleaned up. The Washington State Department of Transit advised drivers to roll up their windows as they passed the crash site.

A head-on crash on Capital Mall Drive left an elderly couple seriously injured. The crash occurred on Tuesday around midday. The driver of the other vehicle has been arrested, and police believe that drugs or alcohol played a part in the crash.

A three car crash in Seattle’s Ballard neighborhood sent one person to the hospital on Thursday afternoon. Two cars and a pickup truck were involved in the collision, which happened at a busy intersection. Emergency responders believe that only minor injuries resulted from the crash.

Semi truck rolls over on I-90

Trooper Chris Webb tweeted a dramatic picture of a crash site on I-90 today showing a semi truck tipped over on the shoulder of the road. Fortunately, only minor injuries were reported from this truck accident. Trooper Webb also tweeted pictures of the truck’s only passenger, a small dog, unharmed at the scene of the accident.