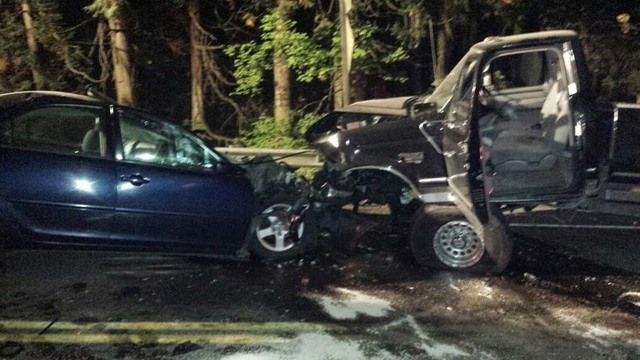 The aftermath of a head-on crash near Duvall. Image source: KIRO7 News

A pedestrian was sent to Summit Medical Center after a driver backed into him at the Porter Creek Campground. According to the Washington State Patrol, the driver who was involved in the pedestrian collision was intoxicated at the time. He is facing charges for driving under the influence.

A motorcyclist died in Redmond after colliding with a Microsoft Connector bus. The motorcyclist died at the scene. No passengers were on the bus at the time of the collision, and no other injuries were reported. The Connector is operated by MV Transportation on behalf of Microsoft.

A 28-year-old man died in a motorcycle accident after colliding with a minivan on State Route 7 near Elk Plain. The minivan was turning left into a private driveway when the motorcyclist was unable to slow down and crash into the side of the vehicle. According to Washington State troopers, speed was a factor in the crash. No charges are pending against the driver of the minivan.

Woman struck by train in Centralia

A young woman was hospitalized after being hit by a train on Sunday afternoon. She was airlifted to Harborview Medical Center in Seattle and was listed in serious condition. An investigation into the circumstances of the collision is currently underway.

1 injured in crash near Brinnon

A 65-year-old man was injured when he drove down an embankment on U.S. Highway 101. He was transported to Harborview Medical Center in Seattle. According to investigators, the man veered off the road while trying to avoid a head-on collision with another vehicle approaching in his lane. Jeffery Plant of Penticton, B.C., whose unsafe passing caused the other driver to veer off the road, was taken into custody and is facing charges for driving under the influence. The man who was injured is now in stable condition.

A Kennewick man died in the early hours of Monday morning on State Route 26 near Colfax. His car crossed the center line and then struck a tree by the side of the road. He was ejected from his vehicle and died at the scene. Investigators are looking into the circumstances of the accident.

A robbery and kidnapping suspect led police on a chase in Seattle before crashing his vehicle in the Beacon Hill area. The suspect then fled on foot. Detectives apparently know the identity of the suspect. No injuries were reported in the crash.

A two-vehicle crash on Woodinville Duvall road left one person dead and another injured on Wednesday night. According to the King County Sheriff’s office, one vehicle crossed into the opposite lane, causing a head-on crash. Investigators are looking into the circumstances of the collision.

Two people were taken to hospitals after a car accident on Vantage Highway near Ellensburg. The one-car crash apparently started when the driver lost control of his Volkswagen Jetta. The car veered into an irrigation ditch and rolled over several times before coming to rest. The driver was transported to Harborview Medical Center in Seattle with serious injuries. A teenage passenger in the car was taken to a local hospital, but was later transferred to Harborview as well.