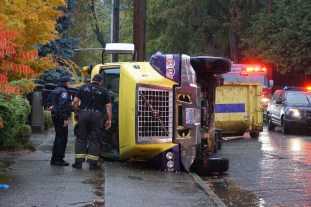 Emergency responders at the scene of a truck that tipped over in Seattle’s Capitol Hill neighborhood. Image source: Capitol Hill Seattle Blog

A teenager was killed in an ATV accident on Friday evening in Whitman County. Police believe that the teen was traveling on a local road when he lost control of his ATV and was ejected from the vehicle. The ATV then landed on top of him. The teenager had been hunting, but was separated from the group. Members of his hunting party found him and called 911.

A 71-year-old man from Everett was seriously injured when a driver hit him in front of his home, then sped off. Abdul-Karim Abu-Emarah was left bleeding in the middle of the road after being thrown through the air by the force of the crash.

He sustained multiple broken bones and injuries to his knees, hands, and elbows. Police have stated that they are searching for a white car with tinted windows and a sunroof; the car had temporary license tags at the time of the crash, and will most likely have damage on the front driver’s side.

Police in Pasco arrested two people for illegal street racing on Court Street. The area is known for being a dangerous area for drivers and pedestrians, since the speed limit on the road is 35 miles per hour, but racers routinely drive more than 60 miles per hour. “You’ve got schools very close to Court Street. When school gets out there’s hundreds of kids with backpacks walking across court street to go home,” Sgt. Brad Gregory of the Pasco Police Department told reporters.

An accident caused by a teen driver caused quite a scare Sunday night in Kennewick after the driver veered off the road and ended up in a stranger’s front yard. Police stated that the teenager had been driving erratically before the crash, and only narrowly missed running into a house. No injuries were reported.

A bicyclist sustained serious injuries after colliding with a car on Elliott Avenue West in Seattle. Medics transported the cyclist to Harborview Medical Center with life-threatening injuries. Investigators have not yet told reported whether drugs or alcohol were involved in the accident or whether the driver of the car will face any charges.

A driver who lost control of a speeding car caused a chain reaction crash early Tuesday morning in Seattle. Police stated that the driver was travelling too fast for conditions when they ran into a parked car, shoving that vehicle forwards, where it struck another parked vehicle. That third vehicle was then pushed forwards, hitting a fourth vehicle. All three of the vehicles that were struck by the speeding driver were parked and unoccupied. The driver was transported to a hospital with unknown injuries.

Child injured after being hit by car

An 11-year-old child sustained serious injuries after a car swerved onto the sidewalk and hit him. The boy was walking to his school in Renton. Medics transported the child to Harborview Medical Center in Seattle; the child's injuries were not believed to be life-threatening, and on Tuesday afternoon, Harborview officials stated that his condition was satisfactory.

Police are investigating multiple reports of rocks thrown from overpasses in Seattle. Multiple drivers on I-5 have reported that rocks cracked their windshields, sending glass flying. Incidents have reported on I-5 near Spring Street, north of the West Seattle Freeway, and in other locations around Seattle. No serious injuries have been reported, but police are concerned that the thrown rocks could cause injuries or deaths.

Bicyclist collides with car in Seattle

A bicycle accident in West Seattle sent one woman to the hospital on Thursday morning. The bicycle involved was a cargo-style bike; a child was also on the bicycle, but was not hurt in the collision. The woman’s injuries were not life-threatening and the collision happened at a low rate of speed.

Dumpster truck tips over in Seattle

A truck rolled over while loading a construction dumpster in Seattle’s Capitol Hill neighborhood. The driver was trapped in the cab and had to be extricated by a “heavy rescue” response team. Two witnesses to the accident called 911 and guided rescuers to the scene of the crash. The driver was transported to the hospital.