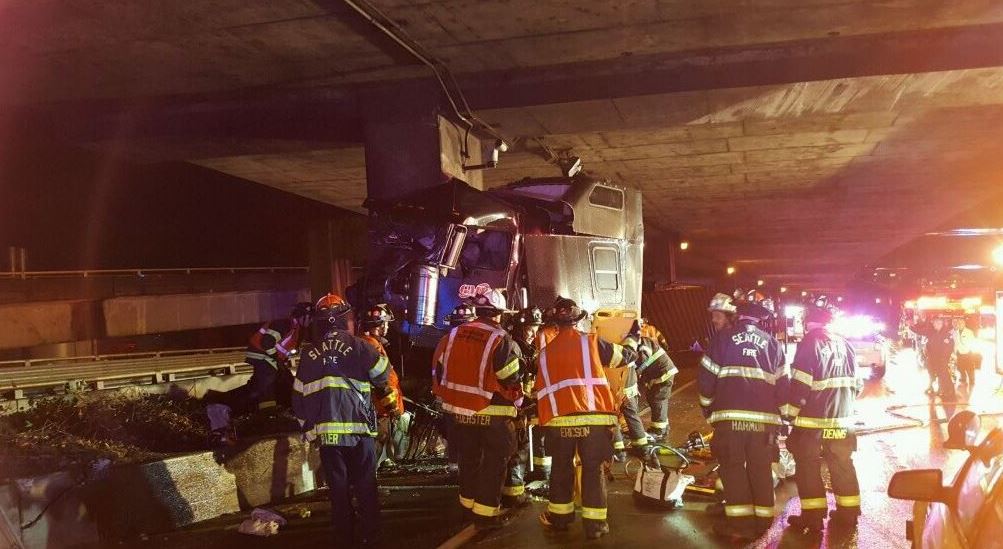 Emergency responders at the scene of a semi-truck accident. Image source: KOMO News

A pair of car thieves stole a pickup truck on Sunday morning and took off. Police chased the blue Ford truck, which began driving north on I-5 at a speed over 95 miles per hour. Police were unable to stop the truck with spike strips. The truck then crossed the freeway and ended up in the southbound lanes, still driving north.

The driver attempted to ram a police sergeant’s car, but the officer successfully avoided the collision. The car thief was finally stopped with a Pursuit Intervention Technique that disabled the vehicle. 30-year-old Konstantin Voyevodin and 24-year-old Bozhko B. Valentinovich were booked on multiple felony changes.

Pedestrian struck by car in Belltown

A pedestrian was struck by a vehicle in Seattle’s Belltown neighborhood. The woman had been crossing the street in a marked crosswalk when an Audi sedan ran over her, trapping her beneath the vehicle. She was transported to Harborview Medical Center with critical injuries. The driver involved did not show signs of impairment and stayed at the scene after the pedestrian accident; he was released pending further investigation. Police said that it was not immediately clear at the scene who had the right-of-way at the time office the collision.

Traffic was stopped on the northbound Interstate 5 express lanes near Lake City Way while firefighters responded to a pickup truck that was on fire in the right-hand land. A witness captured video of the incident; the fire caused several small explosions before the firefighters were able to douse the burning vehicle in foam. Officials have not released details on the cause of the fire or whether any occupants of the vehicle were injured.

One injured in wreck on I-5

One person was injured after a crash on Interstate 5 in the northbound lanes south of Martin Luther King Jr. Way in Tukwila. Officials reported that the backup stretched more than twelve miles; four lanes of traffic were blocked off, with only the high occupancy vehicle lane open.

Washington State Patrol troopers told reporters that a pedestrian was struck by a car and killed on State Route 18 near West Valley Highway. The pedestrian was apparently attempting to flag down a vehicle while standing on the off-ramp. A pickup truck struck and dragged the man, killing him. The driver of the pickup truck told troopers that he did not see the pedestrian before the collision.

One killed in semi-truck rollover

A semi-truck turned over in the northbound I-5 express lanes, sending debris flying across the roadway. The driver was killed in the truck accident, and a second person suffered minor injuries after being hit by flying debris. Officials were concerned that the wreck may have caused structural damage to the freeway; they kept the road blocked off until Friday morning in order to ensure that the road was safe.