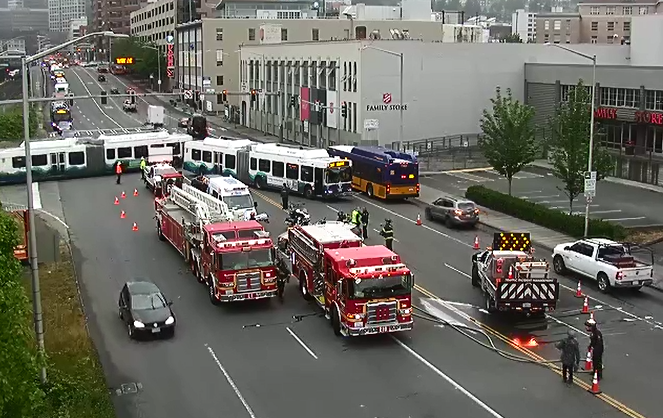 Seattle Department of Transportation (SDOT) reports a crash involving a hatchback and a Metro Bus near the I-90 off ramps on 4th Ave S.

Traffic was reduced to one lane in both directions after emergency crew arrived just after 7:30 Wednesday morning including multiple fire and rescue vehicles creating a barricade around the passenger vehicle involved.

According to SDOT on Twitter the crash was blocking at least three lanes just outside the salvation army parking lot until after 9:00 am when crews were eventually able to clear the scene.

Few details have been released at this time regarding passengers on the transit vehicle or in the hatchback that was struck, however a witness reported seeing fire crews working on the vehicle, appearing to remove the roof or other structure of the vehicle with heavy machinery.

Due to the lack of information available at this time, it is impossible to determine the extent of the damages in this accident, or who could potentially be liable. 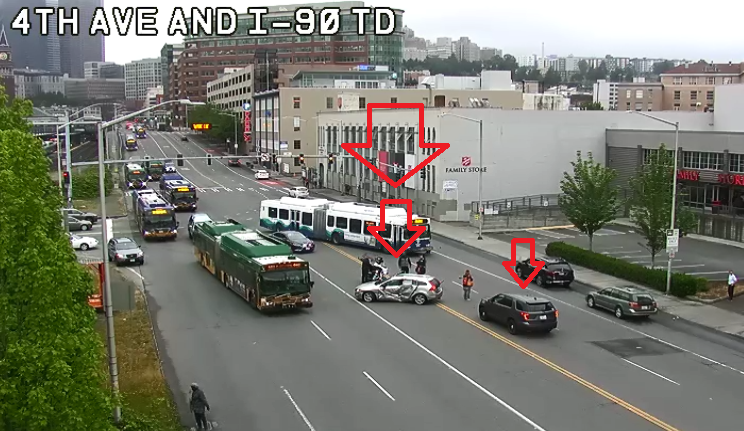 Based purely on the images released on SDOT’s twitter of traffic cameras on the scene it appears the passenger vehicle was struck in the side. This type of damage often is in indication of a T-bone crash, potentially involving one vehicle failing to yield.

Officials on the scene will conduct an investigation involving interviewing drivers, witnesses and analyzing the crash site itself to determine if one vehicle may have  failed to yield, but those injured in a crash like this should reach out to experienced personal injury lawyers to conduct their own investigation to help better understand the full extent of potential damages a victim may be entitled to.

The team at Davis Law Group offers no obligation consultations to anyone who may have been involved in crashes like this by phone at 206-727-400 or online using the form below or chat function anywhere on our website.