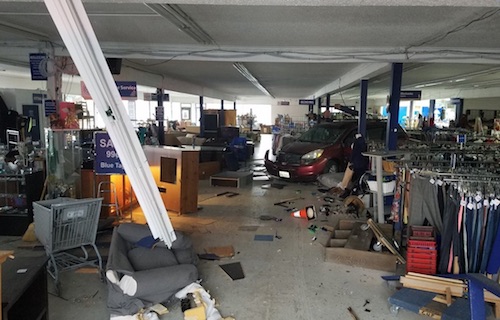 A woman was badly injured in a car accident Monday when a car plowed through a wall and into a thrift store in Burien, according to the King County Sheriff’s Office.

The crash left a huge hole in the side of the St. Vincent de Paul Society thrift store. The car was several feet inside the business, surrounded by damaged goods and debris.

A woman inside the store at the time of the crash was struck and sustained minor injuries. She was taken to a local hospital for treatment. The driver of the car was not injured.

The circumstances of the crash remain under investigation.

$1.35 Million for Family in Vehicle-Into-Building Crash

In 2012, Davis Law Group helped recover a $1.35 million wrongful death settlement after a vehicle-into-building crash. Our client, Kaye, was a 60-year-old woman working as an office manager for an insurance company in Renton when a devastating car accident took her life.

Kaye was working at her desk on an otherwise normal weekday when an elderly woman driving on a nearby road crashed through the front window of the business and landed on top of Kaye's desk. Tragically, Kaye was trapped underneath the rubble.

Kaye's husband, Larry, said he and his family interviewed a total of three law firms before they eventually decided to hire Davis Law Group "for a myriad of reasons." The case went to a jury trial, but both sides decided to settle the case for $1.35 million before the trial was completed.

The storefront accident lawyers of Davis Law Group have experience in a broad range of cases involving vehicle-into-building crashes. We can help you and your family pursue financial compensation for your medical bills, lost wages, and pain and suffering. Contact our offices at (206) 727-4000 today.