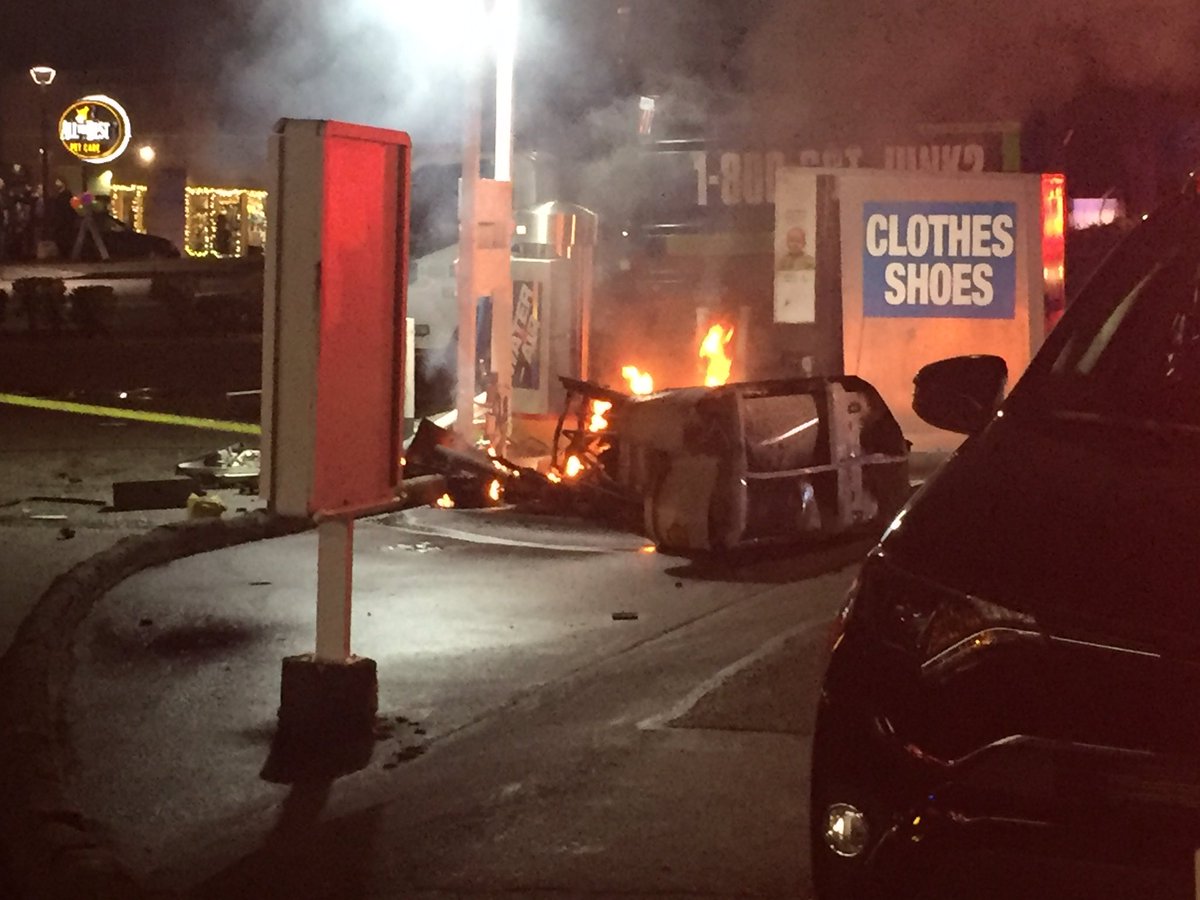 A photograph of the fire at the scene of the accident. Image source: Reporter Henry Rosoff with KIRO7 News

On Monday night in North Seattle, a 2007 Nissan X-Terra SUV speeding on Holman Road Northwest clipped a Honda Accord. The Accord was pushed off the road, where it hit a tree and split in half. The SUV kept speeding eastbound, then lost control; witnesses stated that the SUV appeared to be trying to brake, or may have blown a tire.

The SUV went airborne, careening over a curve and through a parking lot before slamming into a Shell gas station. It hit a gas pump, causing the vehicle to burst into flames. Firefighters had to use dry chemicals and an emergency shutoff to fight the fire while preventing the other pumps from igniting.

The driver of the SUV was evaluated by police officers at the scene, who suspected that he may have been impaired. He was transported to a hospital and given a blood test. The results of that test have not yet been released.

The Seattle Police Department has not yet stated whether they plan to charge the driver of the SUV with driving under the influence, vehicular assault, or vehicular homicide.

Driver was working for Uber at the time of the crash

The SUV was being operated by a driver who worked for Uber, and authorities believe that the passenger had hailed the car using the ride share app. In a statement by spokesperson Tracey Breeden, Uber stated that they removed the driver from the app after the accident. They have not said whether the driver had any previous history of traffic infractions or bad customer reviews.

Uber has been criticized for treating its drivers as independent contractors, not employees, and for failing to appropriately screen the drivers who sign up for the service. In 2015, investigators found that 25 drivers who had been approved by Uber in the state of California had criminal records, including at least one person who had been convicted of murder. Although the company does do background checks, many safety advocates are concerned that they do not require fingerprint background checks. Uber has strongly resisted the use of fingerprint background checks for prospective drivers, and has threatened to leave cities rather than agree to the more thorough vetting.

If you have been in an Uber or Lyft accident, contact Davis Law Group.