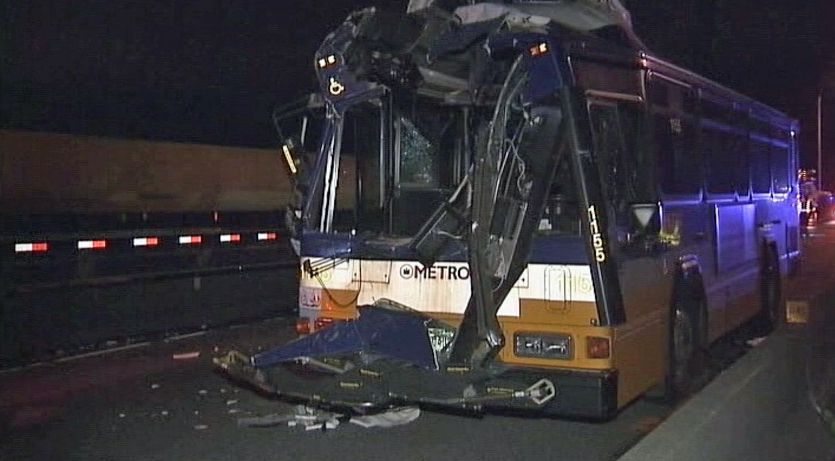 Officials with the Washington State Department of Transportation (WSDOT) say eight people were injured Tuesday night after a construction crane struck an overhead traffic sign, causing the sign to fall in the roadway and land on top of a Metro bus.

According to KING 5 News, a contractor working on the SR 520 floating bridge was using a crane to lift a load of pipes off of a flatbed truck at approximately 10 p.m. Tuesday. Investigators say one of the pipes came loose from the load and struck a Metro bus carrying about 20 passengers.

The pipe reportedly ricocheted off of the bus and then struck the overhead traffic sign, which jarred the sign loose and caused it to fall back on top of the bus. According to the Washington State Patrol, eight of the bus passengers were injured as a result of the falling sign.

One woman on board the bus was also reportedly trapped in the wreckage and had to be extricated from the bus. She suffered a significant leg injury, according to troopers, and was taken to a nearby hospital for treatment. The remaining seven injured passengers were also taken to a hospital for precautionary reasons.

It was unclear if there were any other collisions resulting from the Metro bus accident, but troopers said they did not believe any of the people involved suffered life-threatening injuries.

It’s possible that the contractor responsible for the construction on the bridge could be held liable for the injuries and other damages caused to the injured passengers on the Metro bus. That goes for anyone else who may have otherwise been hurt as a result of the accident.

Although there was a lot of physical damage done to the bus and sign, this freak accident really could have been much worse, and the passengers involved appear to be lucky to have escaped without any fatalities or catastrophic injuries.

The results of the Washington State Patrol’s investigation into the accident will help victims better understand who exactly is responsible for the incident and an experienced Seattle car accident lawyer like the team at Davis Law Group can help them understand what their legal options are moving forward.