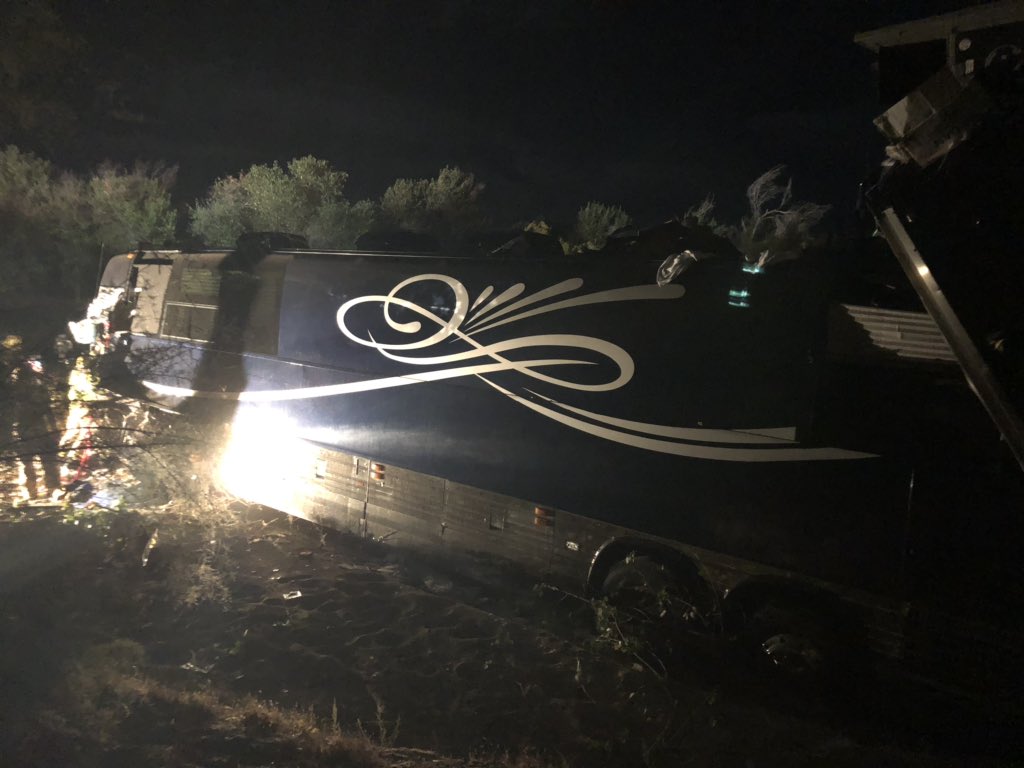 Country singer Josh Turner and his crew were driving through California in Route to a Washington State performance when their crew bus plunged off a cliff, killing one, and injuring seven more aboard Thursday.

The crew were heading to Yakima for a performance on Friday at the Central Washington State Fair when the bus drove along a dirt shoulder before breaking through a fence and plummeting 80 feet down an embankment.

Two of the seven injured reportedly have suffered major injuries while the 5 others were minor to moderate, Turner and his band, were on a different bus at the time.

Investigations have not concluded what lead the tour bus to leave the rode, but according to reports the crew was only 20 minutes from their previous venue and traveled as much as 20 feet off the road before taking the dive.

Reports also indicate that 2 of the crew members were thrown from the bus in the crash, including the one who has died.

California Highway Patrol have already ruled out drugs and alcohol as potential causes and reportedly have turned their focus to medical history of the driver and mechanical failure.

Busses are incredibly efficient people movers, allowing just one vehicle to transport often dozens of people, but unfortunately this also makes them especially devastating in instances of collisions.

It is not incredibly common for seven injuries to occur in a crash involving passenger vehicles as it would typically require three or more vehicles involved. Bus accidents, however, rarely involve so few.

We have seen several large-scale crashes involving buses and other mass transit vehicles in our state, including the Husky Band Bus, rolling in route to the apple cup in 2018, and the tragic ride the ducks crash that killed five.

Just earlier this year an airport shuttle was struck by a passenger car and resulted in seven injuries and a fatality just like this tour bus crash.

The shuttle crash raised questions about passenger safety in these vehicles especially with one passenger being thrown from the shuttle before being crushed by it.

An investigation into what caused the driver to leave the road in this case could reveal any number of things that lead to liability being found anywhere from the driver, tour company, bus manufacturer, or those who last worked on the bus.

An experienced, professional team of bus accident attorneys can help guide accident victims through the complex recovery process. The Davis Law Group has been providing the highest level of service for their clients in the Seattle area for more than 20 years and offers free consultations for accident victims and their families.

If you or a loved one have been injured in an accident, call 206-727-4000  or use the chat or contact options on this page to request your free consultation and case evaluation today.