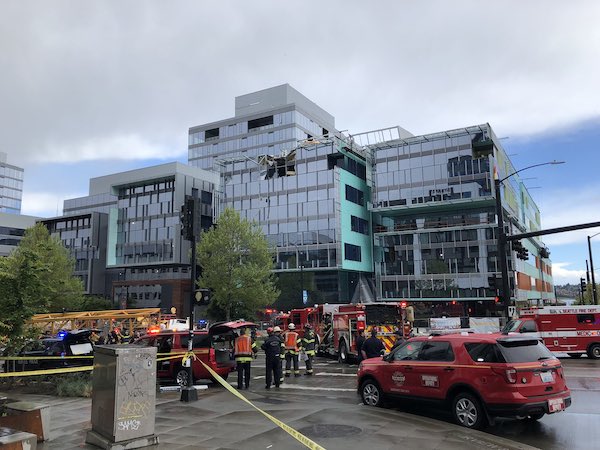 Four people were killed and four others were injured when a construction crane collapsed on several cars in Seattle on Saturday, according to the Seattle Department of Transportation.

The incident occurred around 3:30 p.m. on the west side of Fairview Avenue North and the Mercer Street intersection in South Lake Union.

Among the four killed were the two crane operators and two people in vehicles.

A woman, a child and a man in his 20s were transported to Harborview Medical Center. The man in his 20s was in serious condition. A fourth person was treated at the scene.

Officials said construction crews were dismantling the crane when it fell and hit at least six cars, according to the Seattle Fire Department. The crane was working on a building that will be be used by Google for offices.

All eastbound lanes are blocked. On Northbound I-5, exits 166 and 167 are closed.

Further details are not available at this time. The investigation is ongoing.

Location of the Incident

There are many potential causes of crane accidents, including the following:

Who is Liable for a Crane Accident?

The party which controls or owns the crane may also have liability for the incident. Since construction companies often contract and subcontract parts of a job, responsibility for the accident may lie with one of those sub-companies. An attorney experienced in construction accident claims and other catastrophic incidents can properly sort out the liability issues and hold the right parties accountable for the damage they caused.

If you believe you have a injury claim related to a crane collapse, contact a personal injury attorney to learn about your legal rights and the complicated legal system that follows.

If you or a loved one has been involved in a crane collapse or any construction accident, crane accident, fall or incident, call Davis Law Group for a free confidential consultation, use the chat feature below or fill out the form on this page. We can be reached at (206) 727-4000.