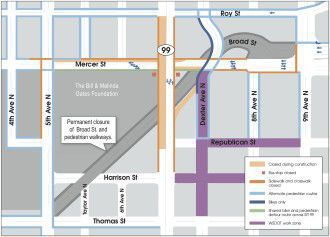 The seemingly endless restructuring of downtown Seattle’s infamous Mercer Street has created a number of obstacles for all sorts of commuters in recent years. Between rush hour traffic jams and detour routes during construction, we’ve come to know Mercer Street as a constant work-in-progress that has regularly affected just about everyone during commuting hours in one way or another.

And ever since the Seattle Department of Transportation (SDOT) made the decision to officially close off Broad Street and turn the previously one-way Mercer Street into a two-way roadway, bicyclists traveling southbound on Dexter Avenue have been faced with the challenge of dodging the motorists who attempt a right-hand turn onto eastbound Mercer Street.

Responding to concerns and complaints from the public about a possibly increased risk of injury to bicyclists, SDOT officials recently announced that motor vehicles would be prohibited from making right-hand turns from southbound Dexter Avenue onto westbound Mercer Street. SDOT says the ban will last at least throughout the rerouting process during the Mercer Street construction project, but could be a permanent thing as well.

From a SDOT spokesperson:

“The change is being implemented to eliminate conflicts between cyclists traveling through the intersection and right turning vehicles.

The Seattle Bike Blog states that it began receiving complaints and concerns from readers and those in the bicycling community about the impact that this conflict would ultimately have on cyclists’ safety. Also notable is a report from The Seattle Times indicating that the ban on right-hand turns comes just a week after two bicycle-car collisions involving vehicles turning from southbound Dexter Avenue onto westbound Mercer Street.

One particularly common response among experts in the transportation community is general surprise at the city’s decision to act so quickly to ban such a traditional vehicular maneuver in favor of bicyclists’ safety.

However, with the South Lake Union area serving as a major throughway for bicycle commuters, this decision is generally being lauded as a progressive step in protecting bicyclists in the city. The Seattle Times says nearly 3,000 bicyclists pass through the bike counter on the Fremont Bridge, most of whom use Dexter Avenue to get into the downtown hub.

All of that being said, this decision is sure to generate some backlash from motorists who are forced to take a detour that could add significant time to their morning commute. What do you think? Share your thoughts about the city’s decision to ban right-hand turns at this intersection in the comment box below.

If you've been impacted by a bicycle crash, contact Davis Law Group.