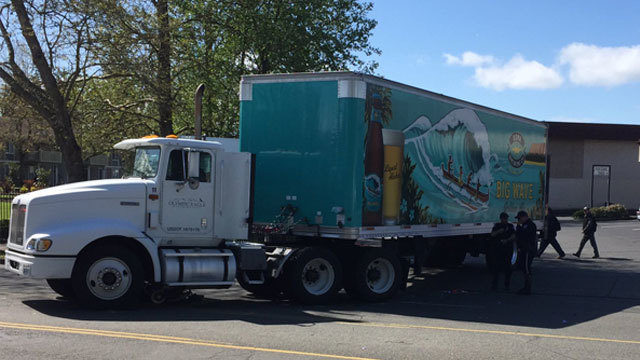 A semi-truck hit two children, sending one to the hospital in serious condition, on Wednesday morning. The incident happened near Steele Street in Tacoma, Washington. According to early reports at the scene, the children were on the sidewalk with their mother when the semi-truck plowed into them.

A stroller with a baby inside it and a 3-year-old girl had to be pulled out from under the truck. The 3-year-old was transported to Mary Bridge Children's Hospital with serious injuries. The baby and the mother have minor injuries.

The driver of the semi-truck told police that he was leaving a nearby parking lot when the crash happened. He stated that he did not see the family before he struck them.

(Image: Investigators at the scene of the collision. Image source: KIRO7 News)

Legal Questions That Must Be Answered

Personal injury cases involving semi-trucks and other large commercial vehicles can be extremely complicated. Because semi-trucks are massive vehicles that carry valuable loads, they are often heavily insured.

When a semi-truck hits someone, the driver is usually quick to call their own employer, who contacts their insurance company right away. This means that the investigations of police and personal injury attorneys often run parallel to investigations by the insurance company that covers the semi-truck’s driver and owner. However, while other investigators are figuring out the facts of the case, insurance investigators are collecting evidence in favor of their client.

After a semi-truck accident, it’s vital to collect as much evidence as soon as possible. These are just a few of the many questions that a trucking accident lawyer might look into after a serious accident involving a commercial vehicle:

Did the driver have any concerning incidents in his history? Companies that employ commercial drivers are required to perform thorough background checks. Unfortunately, it’s often the case that drivers with a history of reckless behavior are allowed to continue operating massive commercial vehicles. A personal injury lawyer will investigate the driver’s history and look for any past incidents that should have been warning signs.

Was the driver distracted? Between cell phones, radios, and GPS devices, it’s easy to take your eyes off the road when you shouldn’t. In a large semi-truck with a cab that’s high off the ground, even a brief moment of distraction could cause a fatal accident. Investigators would look at the devices in the cab at the time of the crash. They would also comb through the at-fault driver’s cell phone records to see whether the device was in use just before or during the accident.

Was the driver intoxicated? Unfortunately, driving under the influence isn’t just a problem among people operating their own private vehicles. While Washington state has strict requirements for the maximum blood alcohol content for commercial drivers, too many truckers flout the law. Drivers on long-haul trips may also be tempted to take stimulants like speed or meth to stay awake.

Was the driver following legal requirements for rest periods? Semi-truck drivers are subject to strict legal resting limits on how long they’re allowed to operate their vehicle without taking a break. They’re also paid by miles driven, not by the amount of time they spend on the road. This gives drivers a strong incentive to falsify their log books when their trips take longer than expected.

Had the driver completed safety training? Many crashes involving semi-trucks could be prevented by following proper safety procedures. Since drivers often operate under tight deadlines or unstated pressure to complete jobs quickly, they often end up taking shortcuts they’re not supposed to even consider. In an investigation, it’s important to have a record of the driver’s previous education on safety considerations.

An Epidemic of Pedestrian vs. Semi-Truck Collisions in Washington State

Wednesday’s crash is not the only recent incident of a semi-truck driver striking and severely injuring a pedestrian. It’s clear that these massive trucks are a danger to pedestrians, bicyclists, motorcyclists, and drivers on Washington state’s roads.

Below are just a few of the many pedestrian accident and semi collision cases that have been successfully resolved by Davis Law Group.