Child Ejected in I-5 Crash in Stanwood 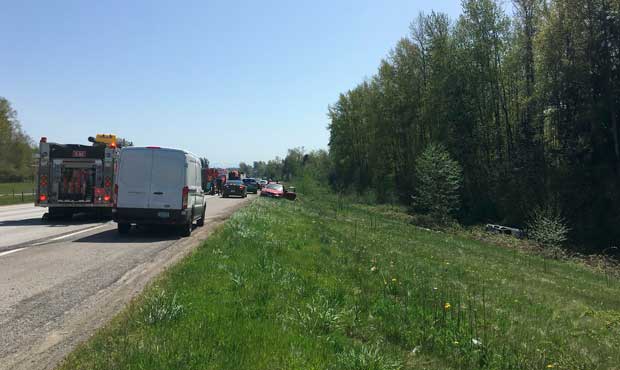 A rollover crash on Interstate 5 near Stanwood has left at least two people injured — including a child who was ejected from a vehicle, according to the Washington State Patrol.

The incident occurred around 12:30 p.m. in the southbound lanes, near the State Route 532 exit, police said.

Police said one of the injuries reported was to a young child, who was ejected in the crash. The child was flown to Harborview Medical Center in Seattle. The child suffered serious injuries but had stable vital signs, police said.

One adult in the car was taken by ambulance to a local hospital. They also are in stable condition.

There is no word yet on what caused the crash. The incident remains under investigation.

SB I5 MP212 collision update. Injuries are serious to both child and driver, both are in stable condition at this time. North bound traffic is now open. SB traffic still closed while investigation continues. TS pic.twitter.com/VKGWm2Hse7

Child Injured In A Car Wreck?

Car accidents unfortunately cause far too many injuries to children each year. A significant portion of those can’t compare to the agony parents and loved ones suffer if their child is hurt in a crash.

For nearly 25 years, award-winning car accident attorney Chris Davis and the team at Davis Law Group, P.S., has represented children and their families from all across Washington state. Mr. Davis has helped children injured in accidents, and their families, get the compensation they need to move on with their lives.

Mr. Davis realizes how frustrating it can be when your child or loved one is injured in a car accident. This stressful time is possibly the scariest and more uncertain you’ll ever encounter. By hiring Davis Law Group, you’ll get an experienced team of legal professionals who will: