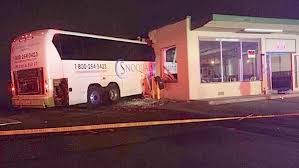 A Snoqualmie Casino bus flew out of control after colliding with a car and crashed into a vacant building in Burien Sunday evening. Around 7:40 p.m., a Cadillac Escalade was reportedly traveling eastbound on Southwest 136th Street while the bus was traveling south on Ambaum Boulevard.

Police are investigating who is at fault, and there is suspicion that one of the vehicles ran the red light and caused the collision. The two people in the Cadillac fled from the scene, and a total of three people were taken to a local hospital following the crash.

Medics and King County sheriff’s arrived at the scene to find the bus nearly inside the vacant building. The driver of the bus experienced severe head injuries and was taken to Harborview Medical Center. Luckily, the casino bus was empty of passengers.

The King County sheriff’s office released a statement that the bus crashed into the building after first colliding with the SUV at the nearest intersection. The two passengers in the SUV were taken to Highline Hospital with minor injuries.

A witness of the crash went into the building after he saw and heard the accident. He checked each row and fortunately found no passengers, only the bus driver who was bleeding from the head and covered in debris. Witnesses described the collisions as something like an earthquake. “I’m working inside, and I hear something like ‘boom!’” said Carlos Ramirez.

Witnesses also reported that the driver of the Cadillac was stumbling and cursing at the officers and that a woman and young boy ran from the car. Police are looking for the two that fled from the scene. "We’re looking for signs of intoxication. But I’m also really interested in whether or not there was in fact another female and child in this vehicle who fled from the SUV. We need to know if they’re injured, how serious, where are they, so we can tend to them," said John Hall, King County Sheriff.

The building with the submerged bus experienced significant damage. Due to the crash and because it was a bus, the roof was shifted up and most of the cinder blocks holding it together, on the north side was gone. Massive amounts of debris and rumble gathered on the ground.

Who Can be Sued for Injuries from a Bus Crash?

For an attorney to determine who is at fault for injuries resulting from a bus collision with a building, there are some specifics that need to be considered. For example, an attorney would likely look into the bus driver's driving record to see if he or she had been involved in similar crashes in the past. If the driver does have a history of being involved in collisions, then the company insuring them should be investigated for hiring and insuring an apparently dangerous driver.

The owner of the bus needs to be taken into consideration as well. This individual could be a charter bus company, an individual, a school district or a metro transit bus. Whoever is responsible for overseeing the maintenance of the bus could be held liable as well. Also, the manufacturer of the bus will need to be under investigation if the bus had a defective part.

In this particular crash, another vehicle was involved and officials will attempt to determine if that motorist may have played a role in the crash as well. Since another car is involved, a claim could potentially be made against the driver of that car.