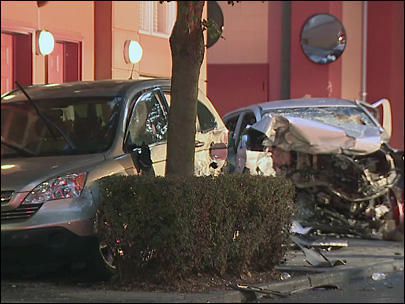 UPDATE: Police officials have determined that the vehicle involved in a truck accident in Belltown Tuesday morning was evading an officer's attempt to pull the truck over just minutes before the crash.

The driver had refused to stop and the officer eventually turned off his lights and stopped following just before the accident occurred.

Four people were seriously injured Tuesday morning after two vehicles collided with each other and crashed into an apartment building in the Belltown neighborhood of downtown Seattle.

Authorities say that a person was driving an SUV on Wall Street in Belltown when a pickup truck emerged from the driveway of an alley near Third Avenue at approximately 6 a.m. The driver of the SUV was unable to avoid the other vehicle, and the collision sent both cars into the wall of a nearby apartment building.

Three people from the truck were critically injured in the accident in downtown Seattle, and rescue crews had to extract them from the vehicle before taking them to Harborview Medical Center. The driver of the SUV was injured but the injuries were non-life threatening.

Davis Law Group helps car accident victims get financial compensation for their injuries and lost wages. We work closely with the criminal prosecutor to make sure that all avenues, both criminal and civil, are being pursued. If you have been the victim of a vehicle accident, contact Davis Law Group at 206-727-4000.