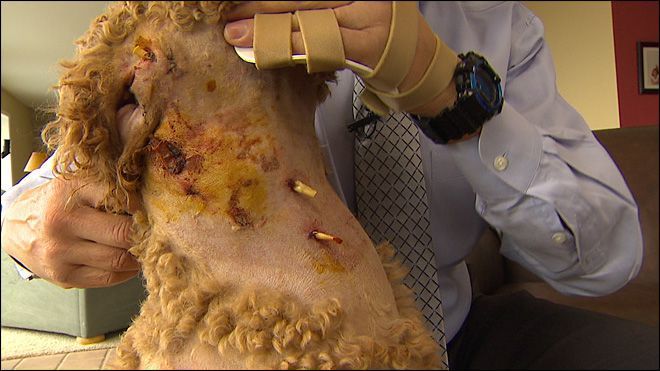 A man and his dog sustained multiple injuries and the family is facing costly veterinary and medical bills after a pit bull attack in Burien on Monday.

What’s equally concerning for residents of the Burien area is the fact that animal control officers say the pit bull is still on the loose, as it belongs to a homeless man who is difficult to locate.

According to a news report from KOMONews.com, Matt Crocket goes on a routine five-mile jog every day with his two dogs in the Shorewood area. On Monday, he and his dogs, Brody and Omar, were waiting to cross an intersection when a pit bull came out of nowhere and attacked one of the dogs. Crockett says the owner apparently had a rope tied around the dog’s neck, but the man lost control of it.

The pit bull attack lasted about four or five minutes, Crockett says, and it latched onto his dog several times and caused serious puncture wounds to the dog’s neck.

“I then started hitting the pit bull in the face and the owner said keep hitting harder, harder,” said Crockett, noting that the punches didn’t seem to affect the vicious dog so he started using the small weights he runs with. “He’s pulling, I’m pounding, I pick up the weight I throw it at its head. I hit it in the head twice.

“Eventually the pit bull let go, my dog went running into the street. It was pretty chaotic,” he added. He says the incident caused quite a scene and multiple drivers got involved in assisting Crockett. Multiple people called 911, but the owner took the pit bull left right after the dog attack ended. Witnesses followed the man to a nearby church and police were eventually able to question him.

Dog Owner Has No Insurance

Upon further investigation, officers discovered that the man was homeless and lives in a nearby park with the dog. Animal Control is reportedly involved in the incident, but because the owner is homeless and therefore difficult to track down, any action involving removal of the dog is going to be tricky.

The most challenging component of this particular dog attack case is that the owner is homeless, which likely means he has no insurance. All accidents that involve serious injury, particularly dog bites, can be both physically and emotionally traumatizing to victims, and filing a personal injury claim is usually the best way for victims to recover financial compensation and move on with their lives.

Because the owner of the pit bull likely does not have any insurance, there really is no source of recovery that warrants pursuing a dog bite claim, which means Crockett is in a very difficult position and, sadly, may have to incur the medical costs on his own.