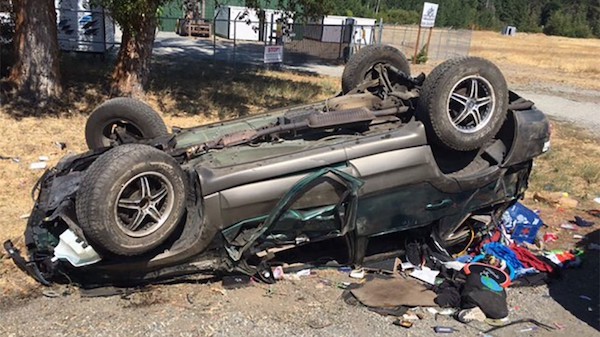 Three boys have now died as a result of the Aug. 27 car crash near Cle Elum.

The driver of the vehicle, a 51-year-old father of one of the deceased boys, was the only one wearing a seat belt. Troopers believe the man was driving under the influence of prescription medication at the time of the crash.

The man has already been charged with vehicular assault, but those charges are expected to be amended to three counts of vehicular homicide now that three boys have died.

The Washington State Patrol is completing its investigation of the incident.

Four boys from Seattle were ejected from a car, and one of them was killed, when a suspected DUI driver lost control and crashed near Cle Elum, according to the Washington State Patrol.

The incident occurred on Monday afternoon on State Route 970 about three miles east of Cle Elum.

A 13-year-old boy from Seattle was killed. The other boys were 12- and 13-year-olds from Seattle. They were taken to Harborview Medical Center in Seattle with serious injuries. None of the boys were wearing seat belts, WSP says.

The driver, a 51-year-old Seattle man, was under the influence of prescription medication, the WSP says. He was arrested for vehicular homicide and three counts of vehicular assault.

The preliminary investigation found that the man was driving east on SR 970 when he lost control of his Mazda Tribute. It veered off the roadway and went down an embankment, flipping several times before landing on its top.

The relationship between the boys and the driver was not immediately known. The full investigation will likely take months.

Passengers involved in a car crash can’t be at fault. At least one driver in the collision will be liable for any injuries you’ve suffered.

In almost all circumstances, passengers can and should evaluate the possibility of filing a personal injury claim to recover financially.

So if the driver has a very low-cost insurance policy, every injured passenger has to split that available coverage. So if a driver has a policy limit of $100,000 — but the crash causes injuries that exceeds that damage — passengers may have to dip into their own insurance coverage.

Things get more complicated when there are disagreements about how the coverage should be split. Consulting with an experienced car accident attorney in your area can make all the difference.

Are you the passenger of a vehicle that was involved in a car collision? Seeking representation from a knowledgeable and dedicated Washington state accident lawyer can help you get the compensation you need to cover medical bills after the accident.

Call Seattle-based Davis Law Group, P.S., now at (206) 727-4000 for a free case evaluation. A car accident can be a complicated mess, which is why we always suggest taking advantage of a free consultation.