Issaquah Boy Hospitalized after being Struck in Crosswalk 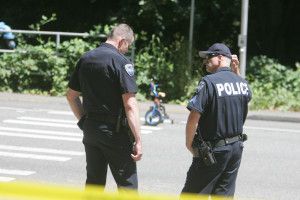 Issaquah police say a four-year-old boy was hospitalized after being seriously injured in a pedestrian accident near the intersection of Newport Way Northwest and Northwest Oakcrest Drive Friday morning.

According to The Issaquah Press, the boy was walking with his mother on Northwest Oakcrest Drive at approximately 11:30 a.m. Friday when they approached the intersection. The boy was reportedly just a few steps ahead of his mother when a passing car struck him while they were in the crosswalk.

The boy was taken to Harborview Medical Center in Seattle to be treated for life-threatening injuries, according to news reports. Police say the 67-year-old woman who was driving the vehicle that struck the boy stopped immediately after the incident and is cooperating with investigators. They do not believe that she was under the influence of alcohol or drugs at the time of the accident.

The news article states that the residential neighborhood has a 40 mph speed limit, which seems quite excessive for a residential area. Residents of the neighborhood say drivers rarely obey the posted limit.

“I’ve asked the city on several occasions that they reduce the speed limit here,” says Hart Sugarman, who has reportedly lived near the scene of the pedestrian accident for more than 19 years. “It’s a classic case of a bad blind spot and it’s obvious that drivers don’t stop. I myself have had to scurry across the street as cars wiz by me. They just don’t obey the speed limit. Where else in the city is it 40 miles per hour on a residential street?”

We often see city officials and transportation departments make safety-related changes to roads after an injury accident has occurred, including additional signage and reductions in speed limits. It would not be surprising to see changes after this particular accident, especially in regard to the 40 mph speed limit.

From a legal perspective, the fact that the driver believed to have caused the accident is cooperating with police should make the personal injury claims process much easier for the family of the young boy. As long as the driver has a liability insurance policy, the family should be able to pursue a claim against the at-fault driver.

In many cases, a person's own insurance policy will often provide coverage if they are injured as a pedestrian. Assuming that the at-fault driver and boy's family both have insurance coverage, there could be multiple policies available to provide coverage for the boy's injuries. Of course, a qualified Seattle personal injury attorney with experience handling pedestrian accident claims will be able to evaluate the best steps for pursuing a personal injury claim. See our pedestrian accident case results to learn more about our experience with these types of cases.