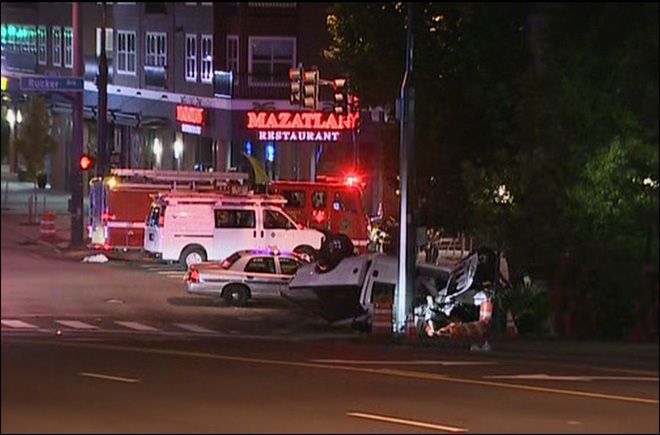 A Bothell police officer who pursued a stolen pickup has been disciplined over the subsequent police pursuit that killed an innocent woman who was on her way to work.

Bothell police Chief Carol Cummings has already admitted that the chase went on for far too long. The officer in question, Mark Atterbury, allegedly pursued suspect Joseph Strange through Everett at around 95 mph. The chase finally ended when Strange’s stolen pickup smashed into the car of Rachel Kamin, who was killed in the collision.

Joseph Strange is going to court in October 2014 for his previous criminal charges, as well as others related to the crash that killed Kamin. But Atterbury was ultimately disciplined because his actions started this chase. The chase might not have been necessary to capture or subdue Strange, as investigators have determined, but it happened regardless and now an unrelated bystander, 40-year-old Kamin, is dead.

Since it was determined that the pursuit should have been ended before innocent bystanders' lives were put at risk, Atterbury was reportedly placed on administrative leave for one day. Naturally, some have found this to be an insufficient form of punishment, to say the least.

When Should Police Suspend a Pursuit?

According to a 2008 report, approximately 42 percent of all police car chases are initiated by routine traffic violations, which may seem like reasonable enough motivation until you consider that a “rolling stop” may cost on unrelated pedestrian or driver her life.

The police’s quarry in a given chase has no regard for the safety of the public. An officer does. Every officer must balance enforcement with safety of unrelated travelers. In a number of pursuits, according to the FBI, officers unfortunately forget this balance and turn the pursuit into a kind of race where the only way they can win is by catching their suspect.

When innocent bystanders’ lives are at risk, a vehicle pursuit isn’t a zero sum game. It’s uncertain how clear police superiors are when they communicate the limits of pursuit to their officers.

This, unfortunately, is the million-dollar question that remains to be determined. It’s hard to change the behavior behind police procedure—especially without accountability. An investigation might determine if the city’s failure to delineate proper chase procedure was negligent.

Police officers have the duty to enforce the law without sacrificing the safety and well-being of the rest of the general public. In cases where a high-speed pursuit results in injury or death to an innocent and uninvolved citizen, that duty is going to be called into question.

For the sake of the complexity of this issue, it would be likely advisable for the victim’s family to consult with an wrongful death attorney who has experience handling the legal issues surrounding a police chase.