Bothell Man Killed While Securing Load on I-5 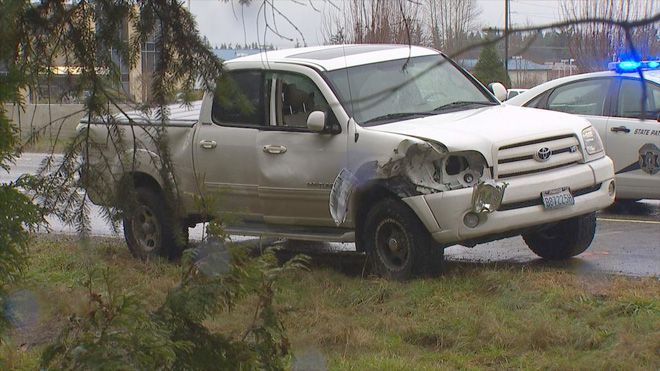 Officials with the Washington State Patrol (WSP) announced on Saturday that a man who had been struck by a vehicle while attempting to secure a loose truck load on the shoulder of Interstate 5 has been pronounced dead.

According to official reports, the man – identified as 51-year-old Gerald Olmstead of Bothell – was riding as a passenger in a pickup truck driven by another man from Marysville. The truck’s load reportedly came loose, prompting the driver to pull over onto the shoulder of the freeway so that Olmstead could secure it. WSP Trooper Mark Francis says the driver of the truck was Olmstead’s son.

A WSP traffic incident report says that as Olmstead got out of the truck and began adjusting the load, another vehicle coming from behind “slowed aggressively, almost to a stop.” A Toyota pickup truck attempted to avoid a collision with the stopped vehicle by swerving into the shoulder, causing the truck to strike Olmstead.

Troopers added in their report that witnesses reported seeing the Toyota pickup weaving in and out of traffic in the moments leading up to the fatal crash. Despite this, they do not believe that drugs or alcohol were contributing factors.

The details surrounding this particular incident are murky at best, and it would appear that any additional contributing factors could be better understood after the WSP’s investigation is completed.

Liability in fatal car accidents that involve multiple vehicles and drivers can be difficult to determine, sometimes even after an official investigation has been conducted.

More complex incidents such as this would often justify professional legal representation, and the family may benefit from at least consulting with an attorney to discuss their legal options. Our thoughts and condolences go out to the victim’s family and loved ones after this unfortunate crash.