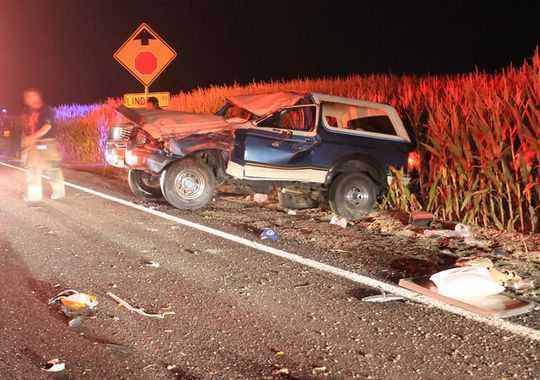 Police in Boise, Idaho were investigating the scene of a single-vehicle car accident Sunday morning when they realized the accounts of the incident from those involved in the crash didn’t pass the smell test.

It is possible that the lingering stench of burning armpit hair may have had Ada County Sheriff’s deputies questioning the passengers’ claims of what exactly caused the collision.

A Different Kind of 'Back-Seat Driver'

According to NWCN.com, police responded to reports of a one-vehicle collision at approximately 5:30 a.m. Sunday on Columbia Road in Boise.

Tristan Myers, the 18-year-old driver of the Ford Bronco involved in the crash, initially told the deputies that he had lost control of the vehicle while trying to avoid an animal that he saw in the roadway. The SUV rolled multiple times, and two unidentified teenage girls were eventually ejected from the vehicle.

The other three occupants remained inside the vehicle after it finished rolling. Police say none of the teens were wearing seatbelts at the time. Witnesses claimed the SUV was speeding and driving erratically in the moments before the crash occurred, which had deputies questioning Myers’ claim that he had swerved to avoid an animal at the last second.

After questioning all of the passengers further, police were able to determine that the front-seat passenger had actually attempted to burn off Myers’ armpit hair with a lighter, which caused him to lose control of the vehicle.

Legal Trouble Could Get Worse for Teens

Three of the passengers, including the two girls who were ejected from the vehicle, were injured and transported to a local hospital to receive medical treatment. Police said the injuries were not life-threatening and that everyone involved was expected to recover. Myers was cited for inattentive driving, while the passenger using the lighter received a citation for interfering with a driver’s safe operation of a vehicle.

Luckily for all of those involved in this incident, none of the passengers suffered any life-threatening injuries, which is something of a rarity in rollover crashes. That doesn’t mean that there won’t be any additional criminal charges filed against the responsible parties, however.

There is a possibility that Myers and the passenger who “interfered” with him could face vehicular assault charges if the injured parties do seek to press criminal charges against them. They could also potentially be defendants in a civil claim if the victims determine it would be in their best interests to pursue one.

It should go without saying that this type of negligent activity can have life-altering consequences, but this is just one of many examples that show some drivers – especially young and inexperienced ones – only learn that lesson the hard way.