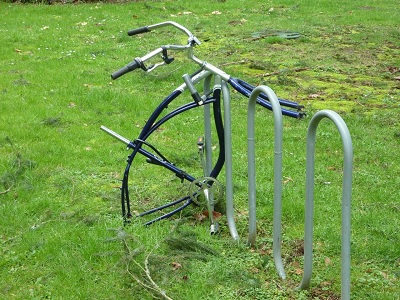 It’s an all too common sight in Seattle: a bike frame locked to a rack with its wheels and handlebars missing, or even a broken lock dangling where a bike should be. Bike thefts in Seattle aren’t a new issue; records from the distant era of 1897 showed that 183 bicycles were reported stolen in Washington State.

In a present-day city struggling with a ballooning heroin epidemic and rising rates of homelessness, bikes are a tempting target for down-on-their-luck thieves: they’re portable, they can be sold quickly, and recovering them is a low priority for police officers who must devote their resources to higher-value crimes.

January of 2016 already saw 41 bicycle thefts reported to the Seattle police (and that’s not counting bicycles that disappeared during burglaries, which are recorded differently in police records). Last year, 1,561 bicycles were reported stolen. Many of those bicycles will never be recovered; criminals will take them apart for scrap, move them out of state, sell them on anonymous services like Craiglist, or even hawk them on street corners.

That’s were Seattle’s bicycle vigilantes come in. After victims of theft post details about their stolen bikes online, civilian crime-fighters scour local listings to find bikes for sale that match the descriptions of stolen property. Then, they get in touch with the victim and offer to accompany them to the “sale,” where they’ll verify that the bike is stolen and tell the criminal to either give up their ill-gotten gains or get reported to the police.

Threatening criminals, many of whom are desperate for quick cash, comes with risks: one vigilante’s wife described him as an “adrenaline junkie.” Another would-be vigilante had to get the police involved after his first attempt to recover his friend’s stolen bike ended in a scuffle with the thief. The dangers aren’t just physical. In 2012, a theft victim posted his thrilling story of stealing his pilfered mountain bike back from a seller–and then found out that the seller, who had apparently purchased the bike from a pawn shop, was putting together a civil case against him.

What can you do to prevent bike theft?

It’s far safer to avoid getting your bike stolen in the first place than to try to recover your bike from a thief. Here’s what you can do to reduce your risk of being a theft target: