Bike Laws: Did you know? 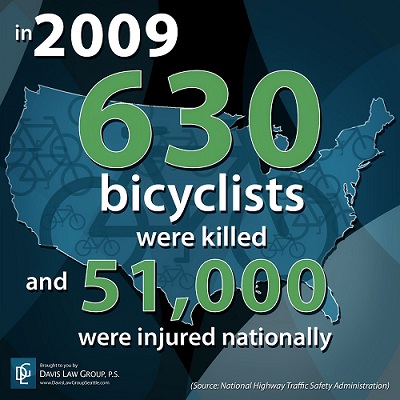 Congress passed a law in 2009 that gives employers a 20 dollar per month tax credit for employees that regularly commute to work on bikes.

Congress believes bicycling is the answer to many problems: it reduces congestion on busy highways, reduces gas expenses, reduces stress, enhances fitness, and much more. On many roads in Seattle, there are now bike lanes and paths that make biking more convenient than it used to be.

Some people do not ride their bicycles because their commute is just too far, the weather doesn’t permit it – or because they are worried about being hit by a vehicle. Many commuters are concerned about safety aspects of biking. In an accident between a bike and a car; the car is most likely going to dominate.

You may be surprised to know that 80 percent of bicycle accidents are due to the biker’s errors.

Eighty percent of serious injuries could have been eliminated or minimized by wearing a bike helmet. Do the math: if you wear a helmet, follow traffic regulations, your odds of serious injury reduced by 96 percent. What is there to be afraid of?

A doctor said that he gives patients a $5 discount on their co-payment for those who bike with a helmet to the appointment.


Have you been injured in a bicycle accident?

If you have been injured on your bicycle due to someone else's negligence, contact experienced personal injury attorney Chris Davis. Mr. Davis handles many high-profile bicycle accident cases in Washington State. Call Davis Law Group at (206) 727-4000 to schedule a free consultation today.