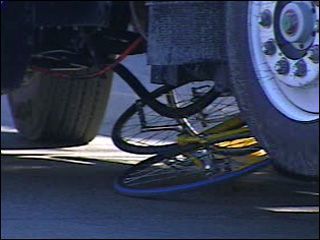 Honestly, I had to do a double-take this morning when I saw a story from The Seattle Times about a bicyclist being hit by a dump truck in downtown Seattle.

According to the story, a 25-year-old woman was riding her bicycle downtown when she was struck by a dump truck and dragged for a short ways through an intersection. She was taken to Harborview Medical Center to be treated for her injuries. According to the Times, the driver of the truck remained at the scene and cooperated with police during their investigation.

Despite the appearance of this particular incident, Seattle Fire Department spokesman Kyle Moore says that the woman did not suffer any serious injuries after being hit by the dump truck. While Moore says the woman was wearing a helmet, it is still incredible that she managed to escape the accident without life-threatening injuries.

The reason I say that I had to do a double-take when reading the article this morning is that there was an almost identical incident that took place just a few weeks back on November 13. A 50-year-old man had been riding his bicycle downtown when a dump truck struck him and caused critical injuries. The driver of that dump truck left the scene and has still not been located. However, police say that driver may have been completely unaware that there was a collision.

It is interesting that there have been two strikingly similar bicycle accidents with dump trucks in such close proximity to each other, both in location and in the time between incidents. Thankfully this time, the woman was wearing a helmet and the driver was aware of the collision and was able to cooperate with police. Anytime you have such similar accidents with potentially devastating results, it is only normal to wonder if there is something that can be done to improve the safety of bicyclists on our roadways.

According to the Times article, there actually was another accident with a dump truck on October 30. Though this was a pedestrian collision instead of a bicycle wreck, the 88-year-old man who was struck by the dump truck was killed.