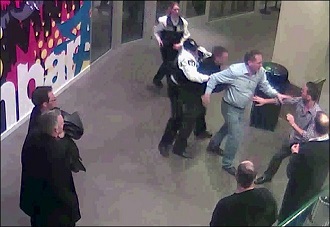 The Bellevue Square Mall has been officially named a defendant in a wrongful death lawsuit related to a 34-year-old man who was inexplicably found dead in his home two years ago.

According to court documents, Steinle Harmes was a healthy man with no apparent health problems before his shocking death in 2012. Paula Harmes, Steinle’s mother, is still reeling from the incident and hopes the lawsuit will help shed light on her son’s death.

Four days prior to Steinle’s sudden death he was involved in an altercation outside of Munchbar, a bar at Bellevue Square Mall. A man attacked Steinle in the hall outside of the bar and it was caught on video camera.

Cameras show the two men exchanging some words before the aggressor begins jumping in place, then charges Steinle. Mall security was on the scene and allegedly witnessed the entire incident without stepping in to stop the aggressive man. In witness testimony, one security worker alleged that the other man threw the first punch at the victim.

Court documents identify Dain Cilley as the man who attacked and potentially caused the death of Mr. Harmes. He is the vice president of emerging markets for Bellevue-located tech company Oracle.

Paula Harmes is suing Cilley for wrongful death, and also named Munchbar – which closed down shortly after the incident due to an unrelated matter – in the lawsuit.

The King County Medical Examiner autopsy report stated that the cause of death of Steinle Harmes was undetermined. When this information was released to the Harmes family, his mother took action to find an answer for her son’s sudden death.

"It's caught on tape. Not only that her son was brutally assaulted and that led to his death, but also that nobody did anything," stated attorney Anne Bremner, who is representing the Harmes family.

Following the release of Paula’s son’s autopsy she felt something was missing. So she took it upon herself to obtain the security camera footage and get a second opinion from a forensic pathologist on the autopsy of her son.

She then examined the wall where her son’s head was hit into and found a 6 inch steel beam with her stud finder, there was a divot left in the wall from her son’s head. Dr. Werner, who looked at the autopsy upon Paula’s request, found that Steinle had in fact suffered from a brain injury due to the impact of the hit causing him to fall into the wall.

"It is my opinion that Jacob Steinle's head trauma resulted in a concussive brain injury which was flowed by a seizure and his death two to three days later," Dr. Werner’s report read and that he felt this was a homicide case.

If the assault from Cilley would not have taken place, Harmes’s mother says he would still be alive today.

"I feel my son was pretty much stuffed in a bag and disposed of," Paula said. "I want justice for my son and I want the truth be know that this happened and this happened at Bellevue Square Mall."