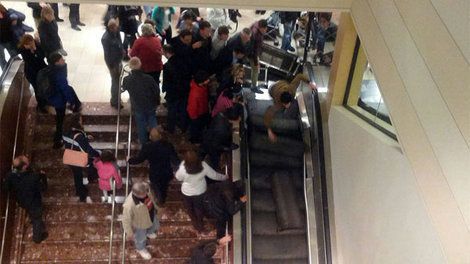 An investigation into an escalator incident at Bellevue Square Mall that happened last December and left several people with significant injuries has revealed that the company in charge of maintaining the equipment did a poor job of insuring the safety of mall customers.

The Washington State Department of Labor and Industries wrote a comprehensive report of its investigation, which blasted Schindler Elevator Corporation for failing to properly maintain the escalator inside the Macy’s store which eventually collapsed in what many witnesses described as a “freak accident.” Investigators found that a metal panel on the side of the escalator stairway snagged on one of the steps, which jackknifed the mechanism and broke the internal chain that moves the escalator along.

Labor and Industries (L&I) found a total of 32 safety code violations in its investigation into Schindler Elevator Company’s policies and procedures regarding the maintenance of the escalator. L&I says 15 of the code violations it found were directly related to the malfunction that left several people injured.

“This is a public safety issue,” says Jose Rodriguez. “L&I will hold this company accountable for its maintenance responsibilities.”

In addition to the violations that led to the initial malfunction of the escalator, a number of other lapses in safety made the situation even worse. The L&I report indicates that three of the escalator’s safety-stop systems failed, and the escalator only shut down after a witness pushed the manual shut-off button.

In L&I’s report, it cited Schindler with a failure to maintain the escalator to code and failure to conduct a required annual safety test in April of 2012. Schindler is also accused of failing to regularly conduct maintenance and safety inspections that would have alerted the company of the risk and helped prevent this incident from occurring.

Thankfully the accident was not devastating and only a handful of people were injured at Bellevue Square Mall that day. But the fact that the companies responsible for maintaining and regularly inspecting the escalator failed to fulfill their duties puts them in the position of potentially assuming liability for the damages that innocent victims suffered.

According to Rodriguez, L&I only has a staff of 22 people available to inspect a total of 16,600 elevators and escalators each year throughout the state. And while they’re technically the department responsible for the oversight of these types of issues, Schindler’s decision to cut corners and hold off inspections clearly resulted in several injuries to innocent shoppers.