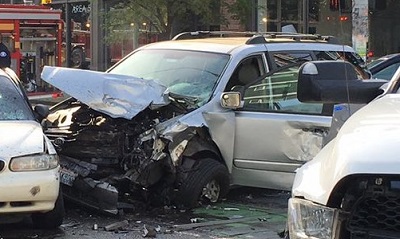 A pile-up began on Seattle’s Capitol Hill yesterday when the driver of a minivan blew through the intersection of Bellevue Avenue and East Pine Street. The van struck two other cars that were in the intersection, causing them to slam into a tow truck. The tow truck then knocked over a passing bicyclist before slamming into the window of the Ramen & Izakaya restaurant on the street corner. A Metro bus was also hit, but not severely damaged.

Despite the dramatic circumstances of the crash, only three people were hurt, and police told reporters that none of the injuries were serious. A 70-year-old man, a 74-year-old woman, and a man in his 60s were taken to Harborview Medical center to be treated for their injuries. The cyclist managed to dodge the worst of the damage, escaping before his bike ended up lodged under the tow truck’s wheel. Employees at Ramen & Izakaya cleaned up broken glass from the shattered window and have already reopened the restaurant.

Intersection has a history of crashes, but Seattle has no plans for a solution

The stretch of East Pine Street between Capitol Hill and downtown has a long history of dangerous crashes. The street slopes steeply down from the hill in an area heavily trafficked by cars, pedestrians, bikers, buses, and skateboarders; it continues through the dense center of downtown Seattle, where gridlocked streets, poor lines of sight, and distracted pedestrians and drivers make for a dangerous combination.

The intersection of Bellevue Avenue and East Pine Street is one of the most dangerous intersections in the city for cyclists. Although Capitol Hill is recognized as relatively low in pedestrian fatalities compared to nearby neighborhoods, it experiences far more non-fatal car versus pedestrian crashes per year than the nearby Central District. Most of the pedestrian fatalities that did occur on the hill happened on the western side, where cars can travel faster along straight but steeply sloping roads.

While nearby Broadway East has seen large-scale infrastructure changes in the last few years, with the addition of dedicated bike lines and a streetcar along certain high-traffic stretches, improvements have been slow to come to Pine. Pedestrians also flock to the popular Pike/Pine corridor at night, when intoxication combined with a long stretch of signal-less crosswalks near popular bars can end in disaster.

Infrastructure improvements along the Pike-Pine corridor in 2009 placed two bus bulbs on Pine Street and a sidewalk on the Pine Street bridge. More work is needed in the area, which has seen an explosion in population in recent years due to its welcoming urban atmosphere and proximity to offices downtown and in South Lake Union. Mayor Ed Murphy’s Vision Zero plan envisioned a city without pedestrian fatalities, but no announcements for further improvements along Pine have been made at this point.