Avoiding And Preventing Car Accidents During Winter In Washington State

If you live in Washington state – or anywhere else in the Pacific Northwest for that matter – then there’s a good chance you’re quite familiar with how the harsh weather can impact traffic safety and our driving abilities during the fall and winter months.

Driving In Seattle During Previous Winters

To put this claim into perspective, the downtown Seattle area saw approximately 18 inches of snow in the infamous winter of 1990. Here’s a picture of the downtown area during the snowstorm from that year: 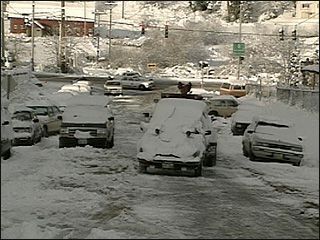 Needless to say, weather experts are wrong about their predictions just about as often as they are right, and the upcoming winter may very well fall short of the epic proportions that we saw back in 1990. But as we’ve seen in the past, even a moderate snowstorm is enough to wreak havoc on the driving conditions in the Seattle area and increase the chances of a person being involved in a car accident.

In fact, watch the video below to see a video of multiple drivers struggling to maintain control of their vehicles during a fairly moderate snowstorm back in November of 2010.

See what happens when just a couple inches of snow combines with ice-slicked roadways? Thankfully none of the innocent bystanders in that video were injured, but there were plenty of reports of people being injured in car crashes during that period.

Now obviously there are some things that drivers in Washington State cannot control when it comes to the weather, and we can all benefit from understanding when the weather is too harsh and the roads are too dangerous for us to be driving around on. But conversely, there are always plenty of steps that drivers can take to reduce their chances of being involved in a motor vehicle accident during the winter time.

Thankfully, the Washington State Patrol (WSP) and other traffic safety experts offer a number of tips for drivers in the Pacific Northwest this winter season:

If you are involved in a motor vehicle collision during the upcoming winter months, refrain from getting out of your vehicle after the crash occurs. Slippery roads can cause drivers to lose control of their vehicles, and a disoriented accident victim is likely to have a difficult time getting out of the way of an oncoming vehicle.

Should you be in this position, make sure you are not at risk of being struck by any other vehicles on the roadway before you speak with the other driver who was involved in the collision. If you suffer any injuries in the collision, it is likely best to call an ambulance so that you may seek treatment for your injuries and get medical documentation that your injuries were the result of the collision you were in. You should also consult with a qualified personal injury lawyer who has experience handling similar types of injury claims.