Asiana Plane Crash Victims Will Not Be Compensated Equally 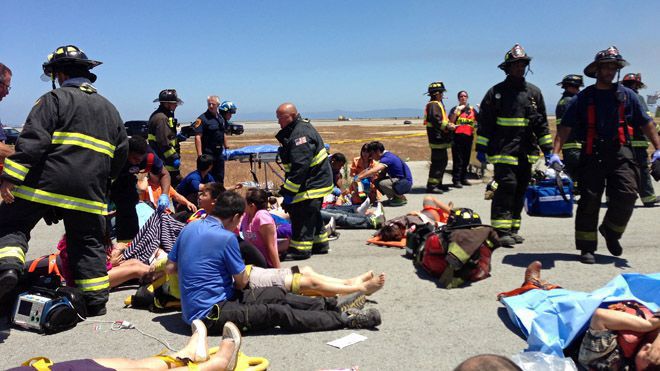 According to initial reports following the plane crash, pilot Lee Kang-kook had flown the model Boeing 777 a total of nine times before the crash occurred but had never flown into the San Francisco airport before July 6. Lee had an experienced Boeing 777 pilot mentor in the cockpit with him, according to news reports, which is in accordance with worldwide aviation standard procedure.

The tail of the plane was torn off from the structure as it crashed into the ground of the landing strip and the plane eventually burst into flames. Two people – both were 16-year-old female students from China – were pronounced dead at the scene of the crash, and a third victim died from her injuries after being listed in critical condition at an area hospital. At least 22 additional passengers from the plane were listed in critical condition at local hospitals, according to hospital officials quoted in news reports.

Authorities have recovered black boxes from the plane, which record activity and voices of the crew in the event of an accident and are reinforced so that they will not be destroyed should a plane crash occur. So far, the black boxes have told investigators that the Boeing 777 plane was traveling “significantly” below its target speed at the time of the crash, according to Deborah Hersman of the National Transportation Safety Board (NTSB).

Passengers experienced a wide range of injuries and conditions as a result of the high-speed plane crash, including head trauma, abdominal injuries and spinal fractures. Doctors at one particular area hospital also found that several patients had developed an unexpected rash all over their bodies. One doctor speculates that the rash can be characterized as “road rash,” which is typically found in motorcycle accident victims who have dragged against a rough concrete surface.

Seat belts can also cause serious abdominal injuries when a plane crashes abruptly at high speeds, and many passengers are currently suffering abdominal bleeding that doctors believe may have been caused by the seat belts. Two patients with spinal fractures have officially been declared paralyzed since the crash.

Compensation for Foreign Victims to be Vastly Different

It should be noted that there is an international treaty that governs compensation to passengers who are harmed, injured or killed in plane crashes while on international air travel. This treaty broadly covers everything from damaged luggage to devastating injuries and even death, and will have a significant impact on any personal injury or wrongful death claims brought forward by the victims of the Asiana plane crash and their families.

Because of this treaty, foreigners will likely not have the ability to file claims in U.S. courts and will instead have to pursue claims in Asia or other countries. The problem with this, according to Seattle attorney Chris Davis, is that these types of lawsuits in Asia and other countries abroad are much more difficult to win and the compensation is often significantly reduced.

Child deaths resulting from the Asiana plane crash could potentially warrant compensation of up to $10 million, Davis says, as long as the claim was filed in the United States. And although it would be difficult to give an exact number, Davis adds that those same claims would pay out much differently if they were filed overseas.

For example, a woman who lost her daughter, son-in-law and three grandsons in a 1997 Korean Air Lines plane crash received $510,000 in compensation after filing a wrongful death lawsuit in South Korea. 228 people were killed in that crash.