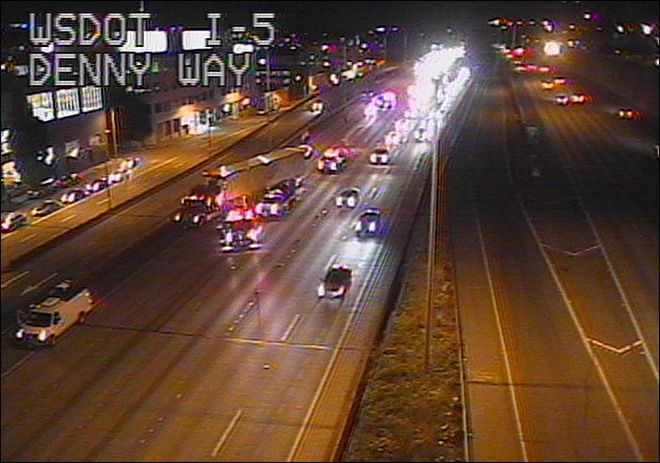 A suspected drunk driver caused several crashes on southbound I-5, which included setting one car on fire. The crash blocked three southbound lanes of I-5 and caused a traffic backup for several miles around 9 p.m.

The thirty-eight year old driver struck a Toyota in his green Ford near Northgate, but did not stop there. The driver of the Ford kept driving southbound and then collided with other cars until his final collision with a semi-truck and a Honda near the Denny Way exit. This collision set the Honda on fire and the driver was taken to Harborview to be treated for her injuries.

The driver, who was driving on a suspended license, was arrested for investigation of a DUI and then taken by ambulance to Harborview Medical Center for treatment of injuries. After his care at the hospital, he will be booked in King County Jail. Reports say that the suspect threw a beer can out the window at one point, striking the vehicles and barrier.

Situations such as these are prime examples of the need to keep drunk drivers off of our roads. Troopers said that they had hoped to stop the crash before it happened. “We hoped to stop him ahead of time, if we can get them stopped with just minor damage that’s considered a win, but unfortunately in this situation, there was a victim.”