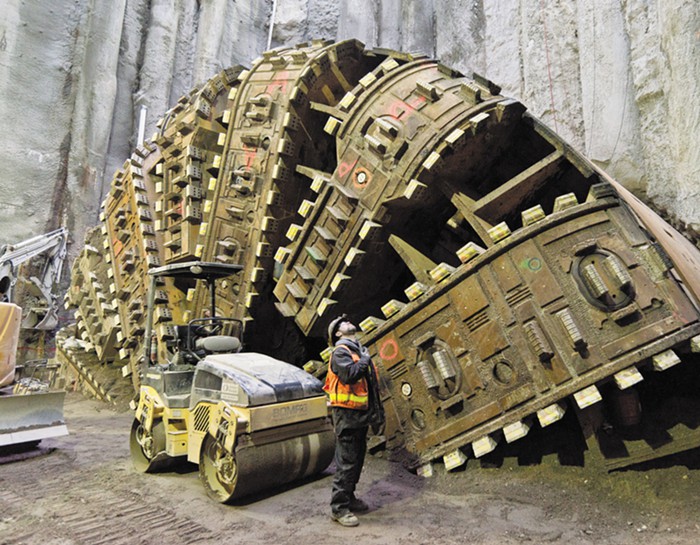 A partial view of the massive tunnel-boring machine. Image source: The Stranger

This morning brought great news for Seattle-area commuters: the Alaskan Way Viaduct reopened early, as officials announced that the drilling machine Bertha passed under the structure ahead of schedule. The viaduct, which sees as many as 100,000 vehicle trips on an average weekday, will eventually be replaced by the underground tunnel.

The ahead-of-schedule reopening is a victory for the Washington State Department of Transportation, which had seen this project’s original timeline stalled by years of delays. The infamous drilling machine stopped for nearly two years following a costly breakdown that resulted in Seattle Tunnel Partners and the Washington State Department of Transportation filing competing claims in court about the cause of the problem. Bertha, named after the first female mayor of Seattle, has been such a huge PR disaster for the Department of Transit that officials dropped is nicknames for other tunnel-boring machines after locals cracked jokes about the stalled machine.

Rare opportunities during the closure

A group of bicyclists took advantage of the viaduct’s closure to vehicles to sneak onto the elevated structure for a nighttime ride. Members of Point 83 bicycle club hopped a cement highway divider, calling the empty viaduct “the best bike lane ever.”  While their behavior was illegal, police decided to let them go without charges.

Downtown businesses made headlines by urging commuters to stick around downtown instead of hopping in their cars during rush hour. Why risk being injured in a car accident in bumper-to-bumper traffic when you can find other ways to pass the time? Using the hashtag #WhyRushHour, they highlighted discounts for people who stayed downtown to eat, drink, and shop after business hours instead of rushing home.

Seattle officials used the closure to highlight lesser-known ways of getting around town. The West Seattle Water Taxi, an alternative to packing onto bridges at peak hours, added five additional round trips during the closure. The city set aside its differences with Uber with a partnership that allowed riders to share a car along a fixed route for a reduced fee. And of course, officials highlighted walking and biking options around the city center.

The work isn’t done yet

While commuters have room to maneuver again, Bertha’s journey is far from over. The boring machine is still in Zone 2 of its eventual 10-zone journey. It has travelled 1,455 feet since the beginning of the project, but must complete an 9,300-foot trip under downtown before the tunnel can open to the public.

The tunnel project isn’t just about commuter convenience. The Alaskan Way Viaduct has already been damaged in one earthquake, and scientists estimate that a major seismic event could cause the structure to collapse on itself. The tunnel, which will eventually replace the dangerous viaduct, will be an earthquake-safe alternative in a seismically active region.

With a booming population and massive tech companies moving in, Seattle’s likely to see even more traffic on the viaduct as Berta continues to travel under downtown. Officials are hoping that the structure will remain standing until it can be safely torn down.

If you have been involved in a motor vehicle accident, contact Davis Law Group.