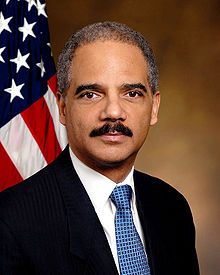 Holder was sworn into office on February 3, 2009.  Before taking office Holder had served as a judge in the Superior Court of the District of Columbia and as a United States Attorney.  He had worked as Deput Attorney General of the United States and had also worked at the law firm of Covington & Burling in Washington DC.  He also worked as a senior legal advisor to Senator Barack Obama during his presidential campaign.
Eric Holder was born in the Bronx in New York City and attended Columbia University.