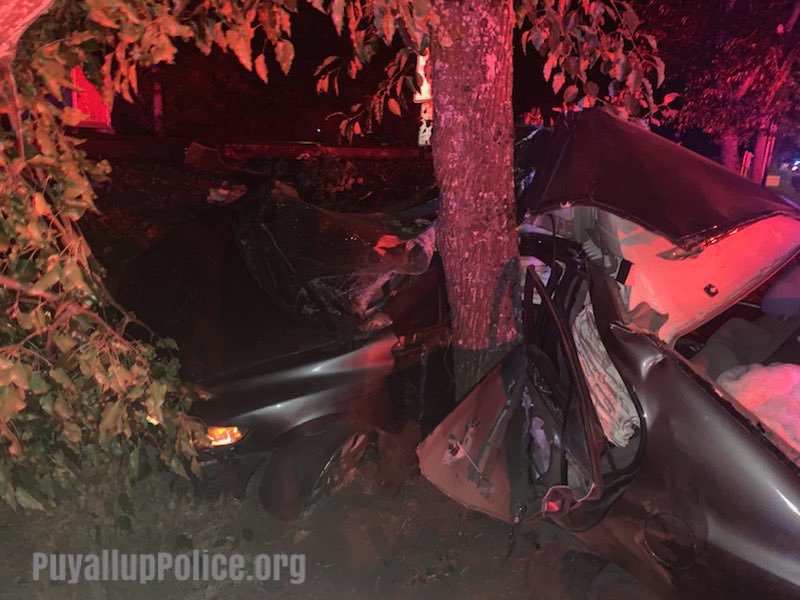 Both Alcohol and speed appear to be contributing factors in a serious car crash that wrapped a sedan around a tree and left a teenage driver dead and three young passengers injured.

Puyallup police responded to the scene at the 1900 block of west Stewart Avenue around 1:30 am Tuesday morning.

The car was clearly traveling faster than the posted speed limit of 35 mph as the car collided with the tree so forcefully it wrapped around the tree and broke the top off it.

Early investigations have found that the 16-year-old driver appeared to be passing at a speed in excess of 80 mph when he over corrected and lost control which lead to the collision.

An empty bottle of rum was found near the vehicle and according to Puyallup Police the passengers in the vehicle appeared to be coming from a house party where the homeowners were away.

Washington state has a zero-tolerance policy for underage drunk driving, and the BAC limit is .02 rather than the adult limit of .08. Beyond that at the age of 16, drivers are not allowed to driver after 1 am or have passengers under 20 years old aside from family.

This lethal combination of speed and underage drinking was enough to endanger the lives of not only those in the vehicle with the driver, but any other driver they came in contact with on the road.

Thankfully, reports have indicated it the three additional passengers in the vehicle do not appear to have life threatening injuries, however even non critical injuries can pose an incredible challenge to overcome after accidents such as this.

Under the Family Car Doctrine, the parental guardians of minors can be held liable both legally and financially for any damages or injuries caused by their negligence behind the wheel. While no other cars were involved in this collision, the driver, and their guardians, could be held liable for the injuries of each passenger.

If you or a loved one were injured in an accident, you can reach out to the award winning team of drunk driving accident attorneys at Davis Law Group, and request a free consultation over the phone at 206-727-400 or online using our chat feature or contact pages.