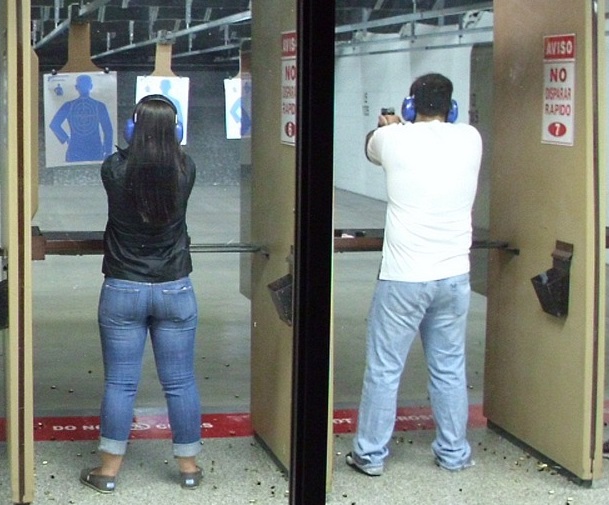 Employees at gun ranges know that their jobs come with certain safety hazards. But recently, health professionals have been raising concerns about a hazard that workers may not know about: lead poisoning.

In small doses, lead poisoning may be hard to detect, but this toxic metal can accumulate over time in the human body. Children who are exposed to high levels of lead may suffer from learning delays or difficulties, developmental delays or stunted growth, gastrointestinal problems, joint and muscle pain, a decreased IQ, low energy levels, and irritability.

Even after lead exposure ends, these conditions can linger. Adults have a higher tolerance for lead than children, but they can also suffer from serious problems as a result of exposure, including nerve damage, infertility, miscarriages, memory loss, high blood pressure, organ damage, and mood disorders.

Anyone who works around firearms all day may be exposed to lead; in addition to touching spent ammunition and breathing in dust, gun range employees have been found to be carrying lead into their homes on their clothing and skin. According to the CDC, shooting firearms is one of the most common non-occupational causes of lead exposure.

Investigators have now found that gun range employees aren’t the only ones affected by lead exposure: their families and children are also suffering from exposure to unsafe levels of lead. While there are regulations limiting how much lead an employee can safely be exposed to in the workplace, some gun range owners are flouting the law without consequence, and others do not even know that their employees are being exposed to dangerously high amounts of lead.

Visitors to gun ranges have been poisoned too. Investigators have sounded the alarm about lead levels in the air and on surfaces at privately owned gun ranges as well as volunteer-run clubs, which aren't subject to OSHA requirements. Health care professionals have expressed concern that children who are learning how to shoot may be touching or inhaling lead and then eating food at these poorly cleaned and ventilated ranges.

Police officers who trained in the Seattle area have also been found to have been exposed to high levels of lead during firearms training. Several years ago, a shooting range in Bellevue became the subject of one of the largest investigations of lead poisoning related to firearms ever in America.

In Washington State, only 10 ranges were inspected between 2004 and 2013. Nine out of 10 had at least one lead-related violation; 96 total lead-related violations were found by inspectors in this state during that time period. In the entirety of the United States, only 201 gun ranges have been inspected for lead. The country has an estimated 6,000 commercial gun ranges.

Government fines have done little to stop safety violations at gun ranges. A Kentucky gun range was recently fined $461,400, but managed to get the total fines reduced to $7,200 due to financial hardship. For many ranges, the necessary retrofits to ventilation, worker safety gear, and ammunition disposal bins may be much more expensive than paying a fine — especially since there’s such a low chance of inspection.

That leaves workers exposed to dangerously high levels of lead with few options besides filing a lawsuit in civil court. One Washington State gun range, Champion Arms, has been named as a defendant in a suit after its faulty ventilation system blew toxic fumes onto shooters and retail workers. Another local establishment, Wade’s Eastside Guns, exposed contractors to lead. Three children and two women in those contractors’ households ended up testing positive for high levels of lead.

Your Legal Options In A Lead Poisoning Case

If you or a member of your household tests positive for high levels of lead, it may be time to contact a personal injury attorney. While occupational exposure to poisons like lead is sometimes covered by Washington State’s department of Labor and Industries, a personal injury attorney can help you understand all of your family’s legal rights after suffering from lead exposure.

Davis Law Group, P.S., works on a contingency-fee basis, meaning you pay nothing up front and we don’t charge attorneys’ fees unless we are successful in making a fair and just financial recovery for you and your family. If you would like to discuss your case with our office, please contact us using the form on this page or call our office at (206) 727-4000.