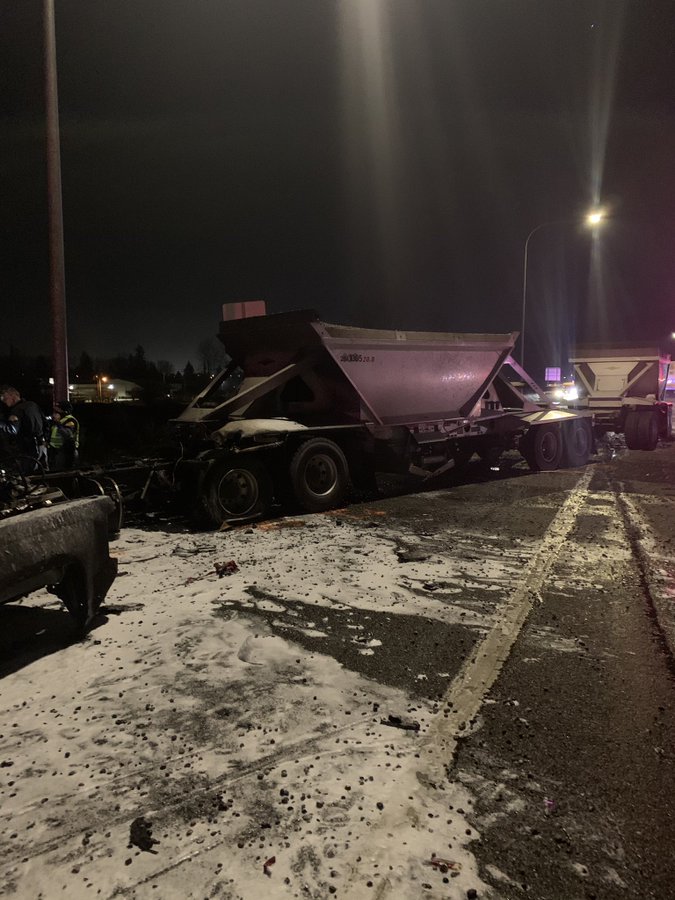 A wrong-way driver on SR-167 lead to a fiery collision that killed two late Tuesday night.

Authorities first received reports of the pickup truck driving south in the northbound lanes around 11:30 p.m. Tuesday night near 180th St in Renton.

The wrong way truck would eventually make it more than 10-miles down the road before colliding with a motorcycle and then a dump truck, sending debris into several other vehicles at the scene.

Two people are dead after a massive crash on 167 near Pacific. A truck driving the wrong way hit a motorcyclist and a semi and burst into flames. The causing driver and the motorcyclist are dead. At least 8 cars involved. NB 167 will be closed for hours. #KOMONews pic.twitter.com/1WOVO7Goic

Both the pickup driver and motorcycle rider were declared dead at the scene, the driver from the dump truck and other vehicles involved were all without injury according to state trooper Rick Johnson of the Washington State Patrol.

Authorities are still investigating what caused the driver to enter oncoming traffic to begin with, and have not released details about the driver or the victim.

Wrong-way driver accidents are unfortunately common in the united states and lead to an average of around 350 fatalities a year nationwide.

Wrong-way driver accidents frequently occur on freeways due to on or off-ramps and specifically are common due to "cloverleaf" type interchanges that can lead to driver confusion.

Over a 10 year study, it was found that more than half of all wrong-way drivers were under the influence of drugs or alcohol at the time of their accident.

Investigators will continue their work understanding what caused this accident to take place and family members of the victims from this crash should understand their rights to make a recovery after a car accident.

Accident victims have three years to claim a recovery before the statute of limitations runs out on their claim, but should not delay their claim as they only have one opportunity to settle a claim with an at fault drivers insurance company.

Family members of accident victims who want to understand the recovery process, and need help finding the best path forward for their specific claim should reach out to experienced wrongful death attorneys like the team at Davis Law Group for a free case evaluation.

Davis Law Group has been getting results for the families of wrongful death victims in Washington State for decades and understands the needs of each accident victim are unique.

If you or a loved one have been injured in an accident and you want to speak with the elite team of attorneys at Davis Law Group, call 206-727-4000 or use the chat or contact options on this page to schedule your free case evaluation today.