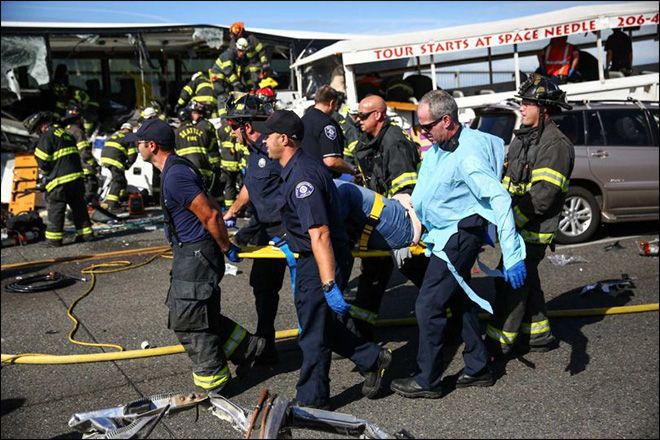 Investigators have been going over the records and safety protocols of Seattle’s Ride the Ducks company since a crash in September killed five people and injured dozens of others. Ride the Ducks is a tour company that uses amphibious vehicles, taking tourists around the city by road and by water. It has not yet resumed operations after the crash, but has been pushing to begin running tours as soon as possible.

Investigators found 442 safety violations of motor carrier safety rules or laws, which could carry fines of up to $1000 per infraction. Seven were violations under federal law: a driver was allowed to operate a commercial vehicle multiple times without a proper license, and random controlled-substances tests were performed too infrequently.

Regulators proposed giving the company an unsatisfactory safety rating after finding 131 violations of critical regulations and 304 record keeping violations. Seattle, unlike other cities in which Ride the Ducks tours operate, does not require the entertainer on a tour bus to be a different employee than the driver; Ride the Ducks has stated that if it does resume operations, future tours will require two crew members on board instead of one.

Two severely injured victims of the September crash have sued Ride the Ducks. With five deaths and more than thirty injuries, the crash is one of the largest traffic incidents of the year for Seattle. But victims who need their medical bills covered may face a unique challenge, even if Ride the Ducks is found to have been negligent: the minimum legally required insurance many not be enough to cover every potential claimant’s damages. Ride the Ducks is legally considered a charter or excursion company, which the UTC only requires to carry a $5,000,000 policy—which might sound like a lot, but may not cover every injured victim who may have already needed hundreds of thousands of dollars of expensive medical treatment.

If you or a loved one was injured or killed in the Ride the Ducks crash, it may be time to look into what your options are before that available insurance coverage is maxed out. Davis Law Group has created a free legal guide for Ride the Ducks accident victims that will help you understand your legal options.