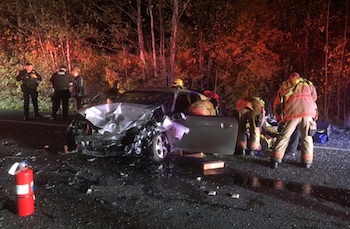 Two people were left with serious injuries in a car accident on Pacific Highway South on Thursday night, according to South King County Fire.

The incident occurred around 10 p.m. near 27300 Pacific Highway South.

Both people injured were taken to Harborview Medical Center.

There was no word on the identities of the victims, how serious the injuries were, or the cause of the accident. The highway was blocked in both directions.

The Most Critical Stage is the Initial Investigation

Immediately after a serious accident, critical evidence begins to disappear. A variety of factors play into this: witnesses leave, the vehicles are moved, the roadway conditions are fixed, people’s memories fade.

Thankfully, police typically arrive on scene within minutes to document what happened. The attorneys at Davis Law Group commend the work of our police departments, but there is additional work that your attorney will do.

The initial investigation done by your attorney should done as soon as possible. But this is just the beginning of your case. The investigation process will continue, and as facts are discovered, your case is strengthened.

Don’t wait another minute to contact the personal injury attorneys at Davis Law Group. For a free case evaluation, call (206) 727-4000, use the chat below or fill out the form on this page to get started.