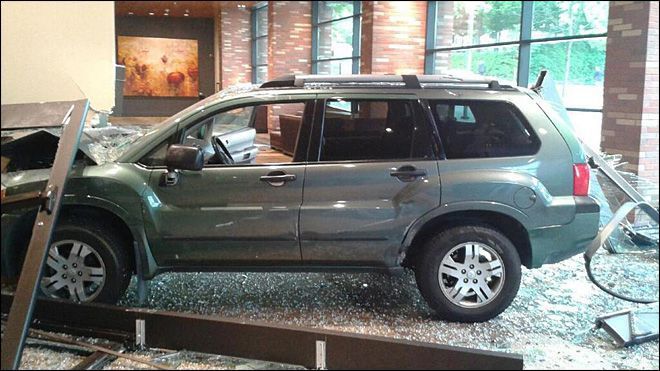 The King County Sheriff’s Office says that at least 11 people were injured after a van involved in a shoplifting incident crashed into a department store building Monday night.

According to news reports from KING5.com, the incident occurred just after 9 p.m. Monday when a shoplifter ran out of the store and jumped into a minivan that was waiting outside the store. The van sped off, but then circled back and struck several vehicles before eventually crashing into the department store building.

The 51-year-old male driver of the van was arrested on the scene under suspicion of driving under the influence of drugs. The female shoplifter was also arrested for shoplifting and for an outstanding warrant.

A two-year-old child, 41-year-old man, and another unidentified adult were all injured as a result of the van crashing into the building. There was little information available regarding the extent of their injuries, but officials say they were taken to the hospital in critical condition.

Awful scene here in Burien, where witnesses say a van drove into a Ross Dress for Less. 4 patients critical, 6 others being treated. Witnesses describe chaos in moments after crash. Store open late for holiday shopping. pic.twitter.com/9GmnNdms6C

There are a lot of potential factors that could have an impact on a victim’s ability to effectively pursue a personal injury claim following a vehicle-into-building collision. The results of a police investigation into the collision should provide clarity to some of the potential legal hurdles.

First, it’s important to understand that establishing liability for negligent behavior is key to any personal injury claim or lawsuit. If for any reason it is determined that an adverse driver intentionally caused a collision, there may be issues collecting a recovery as insurance companies typically don’t cover intentional acts of harm.

It is also important to learn as much as possible about the adverse driver to determine if they carry an insurance policy that would provide coverage to the injured victims. In some cases, the police report for an incident such as this one will have additional information about insurance coverage.

In situations where there are multiple victims with serious injuries, the liability insurance coverage provided by the at-fault driver’s insurance company may not adequately cover all of the victims’ damages. There may be justification for pursuing a claim against the premises for a failure to properly protect the building from a collision, as we have seen in some vehicle-into-building collisions previously.

Consult With An Experienced Lawyer After A Serious Crash

The award-winning personal injury lawyers at Davis Law Group have helped accident victims get the justice they deserve for more than 25 years. Our top-rated legal staff is ready to speak with you about your claim and help you better understand how hiring our team may provide tremendous value to your case.

We understand how to properly investigate auto accidents and determine who may be held legally responsible for a victim’s injuries. Call our office in Seattle at (206) 727-4000 to request a free legal consultation with our team today and to learn more about your legal rights.