11 Injured After Semi-Truck Crashes Into Bus 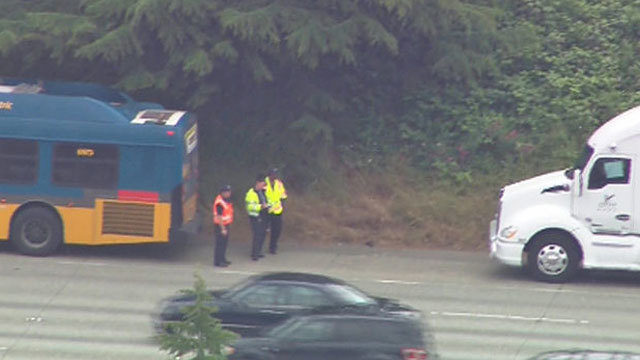 Transit officials are reporting that 11 people were injured when a semi-truck slammed into the back of a Metro bus. The accident happened in the northbound lanes of Interstate 5 near Michigan Street in South Seattle at approximately 9:15 a.m. today. The bus involved was operating on route 150.

According to officials with the Seattle Fire Department, all of the injured people are in “very stable” condition. Neck and back injuries were reported. Both vehicles were drivable, and the drivers moved them over to the shoulder to avoid blocking lanes on the busy highway.

Three people were evaluated and treated at the scene of the accident. Eight more were transported to local hospitals. The bus driver was reported to be “shaken up” but uninjured. According to a King County Metro spokesperson, traffic was able to pass the scene freely, but a small traffic jam developed because people were slowing down to look at the scene of the crash. The Seattle Department of Transit has been working to educate drivers about the problems that rubberneckers can cause, but attempts at levity have been called out as too critical of the public.

Investigators have not yet released a statement on what they believe caused the collision. They have not yet told reporters whether either of the drivers showed any signs of intoxication, or whether distraction could have been a factor in the crash. Metro buses and commercially-operated semi-trucks are both large, heavy vehicles; they cannot stop as quickly as cars and small trucks in normal traffic conditions.

(Image: Both vehicles on the shoulder of the highway after the crash. Image source: KIRO7 News)

What To Do After A Bus Accident

Each year, Davis Law Group talks to hundreds of injured victims of bus accidents. Some of our clients were injured while riding Metro, Sound Transit, and Community Transit buses. Others were riding privately owned and operated charter buses. Bus accidents also frequently injure pedestrians, cyclists, and people in other motor vehicles.

After a bus accident, it’s not always clear to injured victims which entity will be held liable for their injuries. In some cases, it may even take a lengthy investigation to determine which driver was at fault if multiple vehicles were involved.

Seattle Metro does pay out claims to people who were injured on their buses. However, cases involving multiple vehicles can be complicated; in today’s accident, if the semi-truck driver is found to be at fault, injured victims may need to seek compensation from the company that owns or operates that semi-truck.

If you have any questions about what to do after you’ve been injured on a Seattle Metro bus, it’s a good idea to get in touch with a bus accident lawyer. Personal injury attorneys offer free consultations before deciding whether to take a case, so you won’t be charged just for talking about your accident to their legal team. You can speak with our legal team at any time by calling (206) 727-4000, using our online chat feature, or filling out our contact form.