Originally coined by Mothers Against Drunk Driving (MADD), the '100 Deadliest Days' refers to the 100-day period between Memorial Day and Labor Day each year. Washington state sees a significant spike in serious and deadly collisions during this time, especially crashes that involve a teen driver or someone who was under the influence of alcohol or drugs at the time of the collision. But what can we expect during this period as Washington attempts a 'return to normal' in 2021?

Below you will find our original story heading into the 100-day period in 2021, as well as subsequent updates as the year progresses and our team collects more data.

The research team at Davis Law Group has reviewed available data from the Washington State Patrol to reevaluate the trends relating to serious and fatal accidents in recent years. Attorney Chris Davis recently spoke with KLEW News at the start of the 100 Deadliest Days period, commenting that this dangerous trend could continue through 2021 even as the state attempts a "return to normal". So far, the data tends to support that concern.

Though serious and fatal accidents are down 2% year-over-year compared with 2020, there has been a 4.5% increase in serious or fatal accidents when you compare to the trend from 2018 to 2021.

This kind of calculation is particularly interesting when you compare small counties with seemingly few accidents, like Lewis County, to larger ones on a per capita basis. Even though Lewis County has only seen two serious or fatal accidents during the 100 Deadliest Days in 2021, the rate in Lewis County is 14 times higher than King County, and 8.5 times higher than the statewide average.

As we approach the next significant milestone in the 100 Deadliest Days - the 4th of July weekend - the data we reviewed may act as a warning to those who plan to travel for the holiday. Independence Day falls on a Sunday this year, which may lead to more traffic and greater risk of accidents.

What Are The 100 Deadliest Days?

Summertime in Washington state is typically synonymous with warmer weather, popular drinking holidays, and vacations for teens and young adults - a dangerous trifecta that can lead to some of the deadliest conditions on our roadways year-round.

Historically, school-age teens and (young) adults have more free time on their hands during the summer months, particularly during this 100-day stretch. Summertime festivities often go hand-in-hand with alcohol and illicit drug consumption in the United States, and the same rings true in Washington.

According to data published by the Washington State Patrol (WSP), there were an average of 653 serious or fatal accidents during the 100 Deadliest Days between 2016 and 2019, with 681 being the most in a single year. The main hot spots for accidents pre-pandemic include those you might expect: Seattle, Tacoma, Everett, Spokane, Vancouver and Yakima.  A majority of the cities that round out the top 10 for serious or fatal accidents regularly experience heavy traffic volume or are located along busy highways, such as Interstate 5.

The data follows what one would logically expect to see for these years. Occasionally, more populated cities in Washington will see a spike in the frequency of severe or fatal accidents. But the WSP data does not necessarily show any obvious factors that may have contributed to these spikes on their own. Some reasoning could include construction forcing people to take alternate routes, leading to an increase in daily traffic in those areas, and therefore more accidents.

For the most part, we can make a logical conclusion that serious and fatal accidents are more common in densely populated, highly trafficked areas where roadways have higher speed limits. It should be noted that Seattle and Spokane were trending downward in terms of overall accidents and accidents with serious or fatal injuries between 2016 and 2019.

Cities With the Most Serious & Fatal Accidents in 2019

Below is a table showing the ten cities in Washington with the highest number of serious injury & fatal accidents in 2019, the last full calendar year before the pandemic:

According to the WSP, there were 831 total crashes identified as a "Serious Injury Collision" or "Fatal Collision" during the 100 Deadliest Days in Washington in 2020. That represented a 27% increase of such crashes compared with the same period in 2019, the previous year. 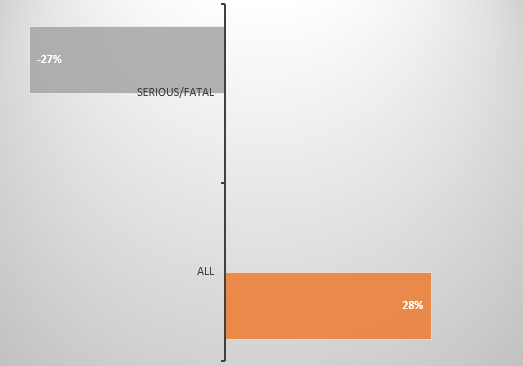 Cities With the Most Serious & Fatal Accidents in 2020

There are differing perspectives on the kind of impact a year-long pandemic might have on consumers' travel behavior, particularly in Washington state. Some experts argue that "pent-up travel demand" across the country will surge as many states reopen their economies and more opportunities for vacation and travel become available to the public.

The upcoming Memorial Day holiday could certainly serve as a trial balloon for what to expect throughout the rest of the 100 Deadliest Days.