A serious eight-car crash on Interstate 5 in Renton left 10 people injured, with five taken to hospitals, according to the Washington State Patrol. The incident occurred Dec. 22 in the southbound lanes around 5 p.m.

Here’s the sequence of events, according to the Washington State Patrol: 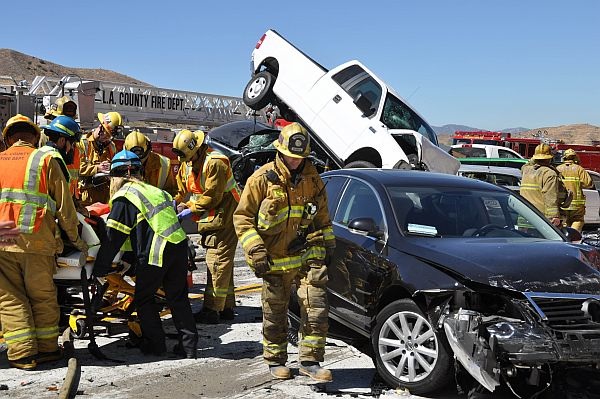 Gary Baever of Des Moines was driving southbound when he lost control of his Nissan Altima and collided with Sothea Kin of Federal Way. Kin's car crossed all lanes of I-5 and stopped after hitting a jersey barrier.

Baever's car continued along and collided with Son Viet of Federal Way. Baever's car came to a rest in the far right lane facing the wrong direction.

Gregory Evans of Seattle was merging onto I-5 from the MLK Way on-ramp and hit Baever's car. That caused Evans' car to roll over, hitting a car driven by Abdulkadir Bashir of SeaTac.

Two cars behind Evans stopped for the crash. But a vehicle behind them driven by Habteab Eklehaimanot of Federal Way hit them both.

The collisions sent several to the hospital. Baever and his passenger, Michael Bullington of Auburn, were transported to Harborview Medical Center in Seattle. Both were not wearing seat belts.

Pile-Up Accidents: What To Know

When one driver makes a mistake or happens to lose control of their vehicle, the ensuing events can be extremely dangerous for other drivers. Unfortunately, multiple car pile-up accidents are all too common.

Adverse weather, reduced visibility and drivers going too fast frequently play a role in these pile-up crashes. These accidents have very little hard data to determine their frequency – they are usually classified as “single-vehicle” or “multiple-vehicle” events. Accidents such as the one above are rarely categorized as "pile-up" accidents.

The driver that initiated the pile-up accident bears responsibility for the crash. That is fairly cut and dry. But the damage caused by the other drivers’ actions make the pile-up much worse, complicating the accident. For example, if a following vehicle was driving too close or too fast for conditions, that may have caused more vehicles to become involved or greater damages.

What To Do After A Pile-Up Accident

You should treat a pile-up accident like any other car or truck accident.

Injured In A Pile-Up Accident In Washington State?

The experienced car accident attorneys at Davis Law Group, P.S., know how complicated and stressful pile-up accidents can be. With sometimes serious injuries and a tangled mess of other stresses, it may be in your best interest to contact a lawyer to handle your personal injury claim.

Davis Law Group operates on a contingency fee basis, meaning we don’t get paid unless you win. No upfront costs. Contact our team of personal injury lawyers today for a free case evaluation. Call (206) 727-4000, use the chat feature below or use the form on this page to get started.