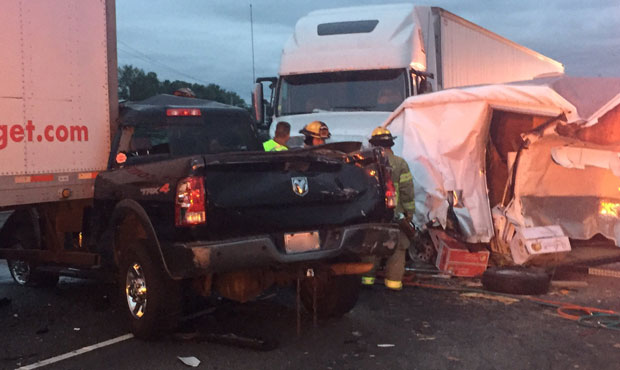 One person was taken to the hospital with serious injuries after a crash involving two semi trucks on southbound Interstate 5 near Marysville early Wednesday morning, according to Marysville Fire District.

The crash at 205th Street Northeast near State Route 531 — the Smokey Point area — was caused by a semi truck that didn't slow down in a construction zone. The semi rear-ended a Dodge pickup truck occupied by two people.

When it was all over, the crash involved two semi trucks and a passenger truck and a trailer. About 100 gallons of diesel fuel spilled onto the roadway.

All southbound lanes of I-5 were blocked for more than an hour.

RELATED: What To Know About Rear-End Or Override Semi-Truck Accidents

When a semi truck is involved in an accident, it is the trucking company that the driver works for that will likely be financially responsible. These trucking companies are prepared to go to battle to defend their large insurance policies. Many companies keep a team of attorneys and experts on the payroll to defend these accidents.

If you choose to hire an attorney to defend you in a semi truck accident case, you've made a smart decision. Immediately after retaining legal representation, your attorney will do a thorough review of the evidence, gather police reports and photographs, as well as collect witness statements. Anything and everything from a semi truck crash scene is useful.

In the search for negligent behavior, your attorney should go the extra mile.

Finding the real reason for the accident and holding the trucking company responsible is the main focus of your attorney. That process shouldn't stop until justice is served.

Like any type of semi truck accident, rear-end accidents are complex and will require experienced representation. In our experience, the trucker and trucking insurance company will fight your claim each step of the way. The insurance company makes more money if they pay less on your claim.

If you have been injured in a rear-end semi truck accident, the personal injury lawyers at Davis Law Group, P.S. can help.

We have an outstanding track record of success and will seek compensation for your medical expenses, lost wages, pain and suffering, and more. We offer a free case evaluation to new clients, and we don't get paid unless you win. Contact Davis Law Group at (206) 727-4000, use the chat feature below or fill out the form to get started.