1 Killed in 5-Car Crash on I-5 in Burlington 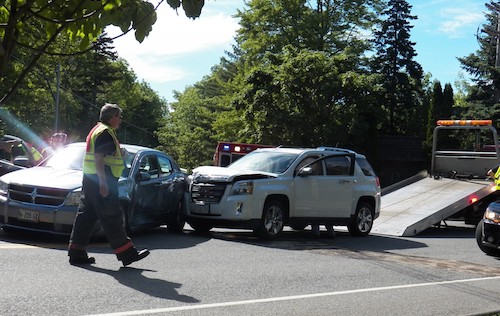 One person was killed and another injured in a five-car crash late Thursday night on northbound Interstate 5 just north of Burlington, according to the Washington State Patrol.

Police say five vehicles were traveling northbound when a Ford Focus slowed for traffic. A Chevrolet Silverado pickup truck did not slow down and slammed into the Focus, causing the other cars to crash as well.

The driver of the Focus, a 22-year-old Stanwood man, was killed.

The 20-year-old Mount Vernon man driving the Silverado was transported to Skagit Valley Hospital with injuries.

The other three drivers involved were not injured.

Charges are pending and the collision remains under investigation.

It should be no surprise that according to the National Highway Traffic Safety Administration (NHTSA), rear-end collisions are the type of crashes that occur the most frequently in the United States. In fact, this type of collision accounts for about 29 percent of all accidents nationwide.

Due to the frequency of such accidents, there has been an extensive amount of research done on them. Researchers at the Virginia Tech Transportation Institute conducted a study to delve deeper into rear-end accidents.

Some of their findings include:

Roadway safety advocates have long pushed for stricter laws governing phone use while driving, hoping to curtail distracted driving. Following too closely combined with distracted driving is one of the main causes of rear-end collisions.

Despite these campaigns, drivers continue to use their phone and cause rear-end accidents. These preventable collisions far too often lead to serious injury or death.

If you or a loved one has been seriously injured or killed in a rear-end collision, you may benefit from consulting with an attorney with experience handling these cases. While the insurance company will push you to accept a quick settlement, the best course of action may be to wait and evaluate your options.

This can be a stressful time, and with mounting medical bills and missed time from work, you probably have many questions. Let a Washington state car accident lawyer at Davis Law Group, P.S., guide you through the process.

We offer free case evaluations and operate on a contingency fee basis, meaning we don’t get paid unless you win a settlement. Contact us today at (206) 727-4000, use the chat feature below or fill out the form on this page to get started.